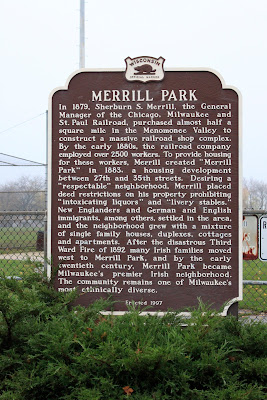 Erected 1997 through the generosity of
the Ancient Order of Hibernians,
the Shamrock Club of Wisconsin,
the Neville-Dunn American Legion Post No. 489,
the Sesquicentennial of Milwaukee,
the Merrill Park Neighborhood Association,
the Milwaukee Irish Fest, the Gaynor Family,
the Alumni and Friends of Merrill Park
and the Irish Cultural and Heritage Society of Wisconsin
Milwaukee, Milwaukee County, Wisconsin
43° 2.16′ N, 87° 57.475′ W
Google Map

In 1879, Sherburn S. Merrill, the General Manager of the Chicago, Milwaukee and St. Paul Railroad, purchased almost half a square mile in the Menomonee Valley to construct a massive railroad shop complex. By the early 1880s, the railroad company employed over 2500 workers. To provide housing for these workers, Merrill created “Merrill Park” in 1883, a housing development between 27th and 35th streets. Desiring a “respectable” neighborhood, Merrill placed deed restrictions on his property prohibiting “intoxicating liquors” and “livery stables.” New Englanders and German and English immigrants, among others, settled in the area, and the neighborhood grew with a mixture of single family houses, duplexes, cottages and apartments. After the disastrous Third Ward Fire of 1892 many Irish families moved west to Merrill Park, and by the early twentieth century, Merrill Park became Milwaukee’s premier Irish neighborhood. The community remains one of Milwaukee’s most ethnically diverse.

The marker is located at Merrill Park on southbound North 35th Street, south of West Michigan Street, at the end of a driveway / parking lot, Milwaukee, Wisconsin 53208. 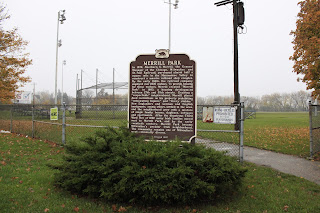 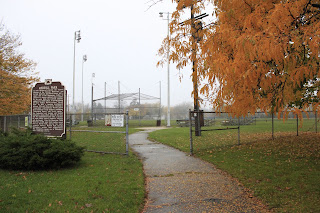 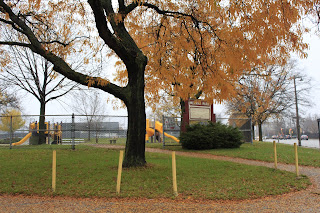 Marker is past the entrance to and inside of Merrill Park.