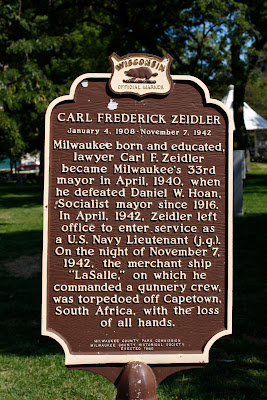 Milwaukee born and educated, lawyer Carl F. Zeidler became Milwaukee’s 33rd mayor in April, 1940, when he defeated Daniel W. Hoan, Socialist mayor since 1916. In April, 1942, Zeidler left office to enter service as a U.S. Navy Lieutenant (j.g.). On the night of November 7, 1942, the merchant ship “LaSalle,” on which he commanded a gunnery crew, was torpedoed off Capetown, South Africa, with the loss of all hands.

The marker is located at Zeidler Union Square on eastbound West Michigan Street, on the southeast corner of its intersection with North 4th Street, Milwaukee, Wisconsin 53203. 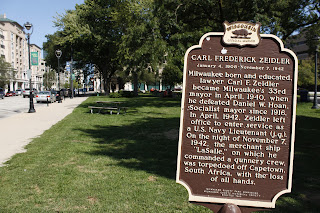 Visited this site today, July 22, 2015, as I waited for a connection at the Greyhound Station. This park also has a neat chain fence made from words and smaller signs documenting the workers' rights movement in WI.

I remember that fence -- very cool! But wasn't sure what it represented, so I didn't photograph it. Thank you for your comment, Joshua! I'll be sure to photograph that fence when I'm back in Milwaukee this Sunday!