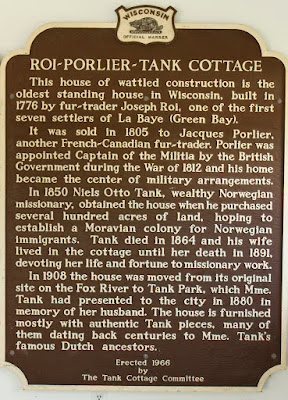 This house of wattled construction is the oldest standing house in Wisconsin, built in 1776 by fur-trader Joseph Roi, one of the first seven settlers of La Baye (Green Bay.)

It was sold in 1805 to Jacques Porlier, another French-Canadian fur-trader. Porlier was appointed Captain of the Militia by the British Government during the Way of 1812 and his home became the center of military arrangements.

In 1950 Neils Otto Tank, wealthy Norwegian Missionary, obtained the house when he purchased several hundred acres of land, hoping to establish a Moravian colony for Norwegian immigrants. Tank died in 1864 and his wife lived in the cottage until her death in 1891, devoting her life and fortune to missionary work.

In 1908 the house was moved from its original site on the Fox River to Tank Park, which Mme. Tank had presented to the city in 1880 in memory of her husband. The house is furnished mostly with authentic Tank pieces, many of them dating back centuries to Mme. Tank's famous Dutch ancestors.

This marker is located inside the concessions building at Heritage Hill State Historic Park, 2640 South Webster Avenue, Green Bay, Wisconsin 54301. There is a fee to enter the park.

NOTE: Use the "Heritage Hill State Historic Park" label below to locate all markers at this location.

UPDATE: This marker was added to the WHS official list as of February 7, 2013. 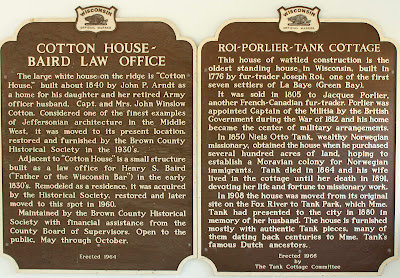 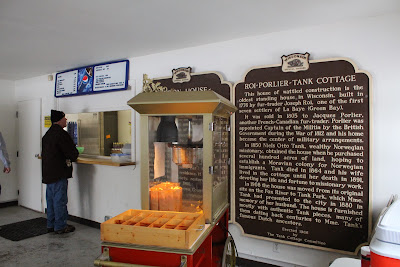 The marker is located inside the concessions building
at Heritage Hill State Historic Park.