Update: August 8, 2013: Historic hotel destroyed by storm
This was a terrifying storm -- tornadoes now confirmed. And I'd recently had the thought to go back and rephotograph the hotel, since this link gets far and beyond the most hits on my website. I now deeply regret not listening to my inner voice. As of this update, there have been over 400 visits to this page since the storm.

While en route (which turned out to be the wrong route) to locate the Winnebago Trial marker, I came upon the ruins of the Maribel Caves Hotel. It’s literally in the middle of cornfields, so coming upon this empty, massive stone structure is a kind of shock to the senses.

There’s a lot of history about this building, including ghost sightings, which now explains the rather eerie feeling I had pulled over in the middle of nowhere taking photos. I do confess to being disappointed at the “No Trespassing” sign (which I did honor).

I’ll be there again tomorrow with a couple of friends to explore the Cherney Maribel Caves County Park, just a little past the hotel ruins and which I also stumbled upon on my way to the wrong place. But, then, there really are no “wrong places,” no mistakes, when on a Zen journey . . .

Curiosity.com: What happened at the Maribel Caves Hotel? -- she took an axe and buried it into his head 14 times . . . 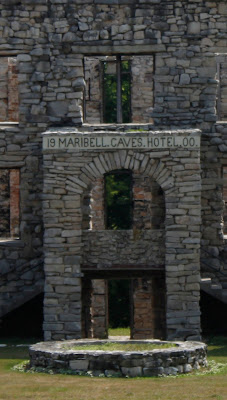 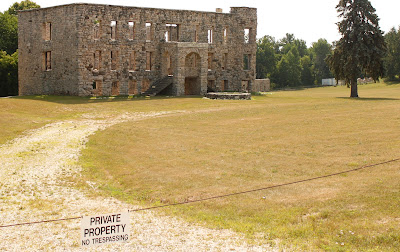 Due to a bad storm last night August 8 th 2013 The Hotel was 75% destroyed not sure what will become of hotel HELL. Live 4 miles from there been by it 100's of times and I never knew all about the place.

I've heard the sad news as I've "liked" the Manitowoc County Historical Society Facebook page and they've had several posts today -- just devastated! In the last four hours, I've had almost 200 visits to this link on my website! Very sad that we have lost this piece of history forever!