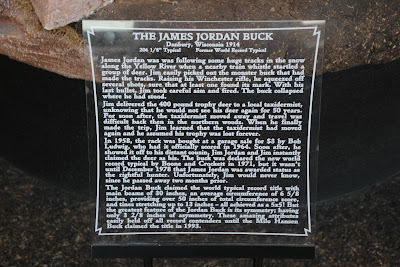 James Jorden was was [sic] following some huge tracks in the snow along the Yellow River when a nearby train whistle startled a group of deer. Jim easily picked out the monster buck that had made the tracks. Raising his Winchester rifle, he squeezed off several shots, sure that at least one found its mark. With the last bullet, Jim took careful aim and fired. The buck collapsed where he had stood.

Jim delivered the 400 pound [sic] trophy deer to a local taxidermist, unknowing [sic] that he would not see his deer again for 50 years. For [sic] soon after, the taxidermist moved away and travel was difficult back then in the northern woods. When he finally made the trip, Jim learned that the taxidermist had moved again and he assumed his trophy was lost forever.

In 1958, the rack was bought at a garage sale for $3 by Bob Ludwig, who had it officially scored in 1964. Soon after, he showed it off to his distant cousin, Jim Jordan [sic] and Jim instantly claimed the deer as his. The buck was declared the new world record typical by Boone and Crockett in 1971, but it wasn't until December 1978 that James Jordan was awarded status as the rightful hunter. Unfortunately, Jim would never know, since he passed away two months prior.

The Jordan Buck claimed the world typical record title with main beams of 30 inches, an average circumference of 6 5/8 inches, providing over 50 inches of total circumference score, and [sic] times stretching up to 13 inches -- all achieved as a 5x5! But the greatest feature of the Jordan Buck is its symmetry, having only 3 2/8 inches of asymmetry. These amazing attributes easily held off all record contenders until the Milo Hansen Buck claimed the title in 1993.

This likeness is located inside the entrance to Cabela's, 1499 Lombardi Avenue, Ashwaubenon, Wisconsin 54304. 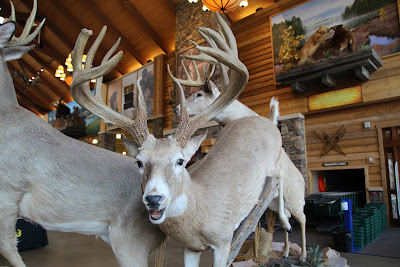 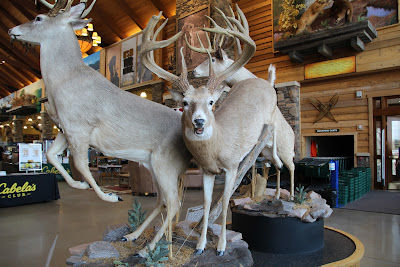 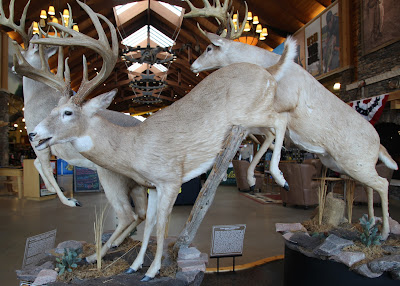 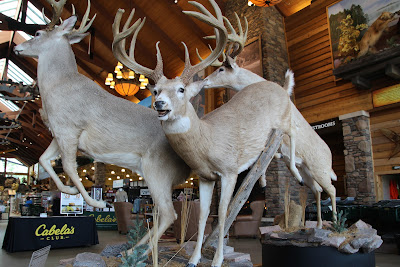 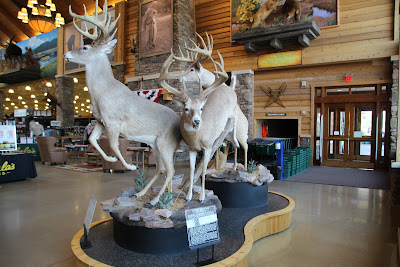 The James Jordan Buck is located inside the entrance
to Cabela's in Ashwaubenon, Wisconsin.