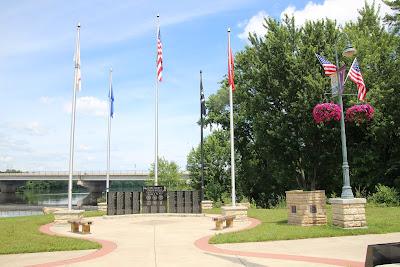 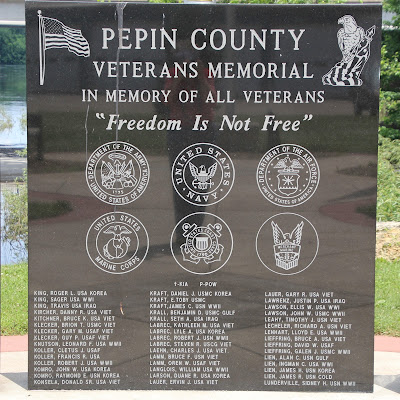 The memorial is located at Lower Chippewa View Park, on the eastern bank of the Chippewa River, and is accessible from River Street, at its intersection with 1st Avenue, at or near 100 River Street, Durand, Wisconsin 54736. 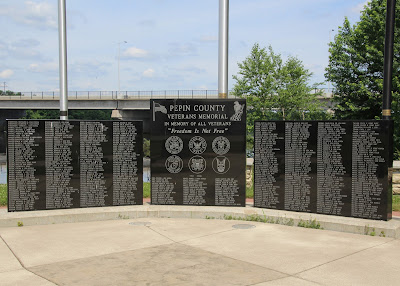 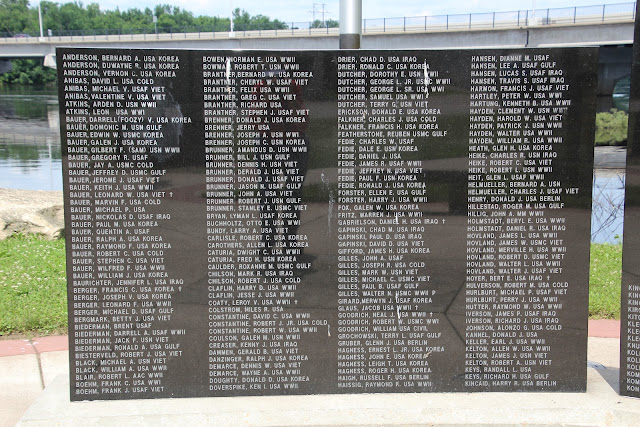 The panel on the left 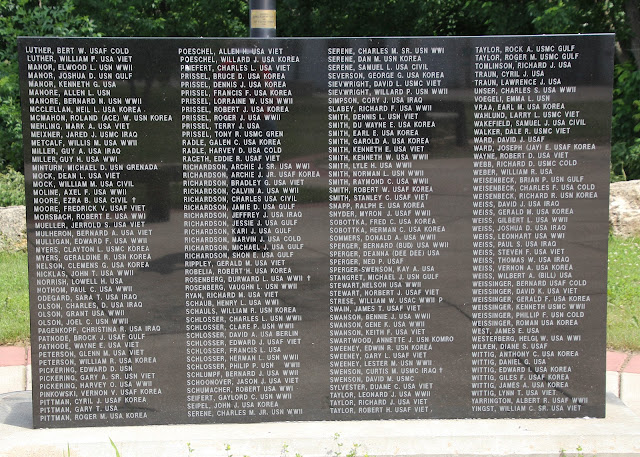 The panel on the right 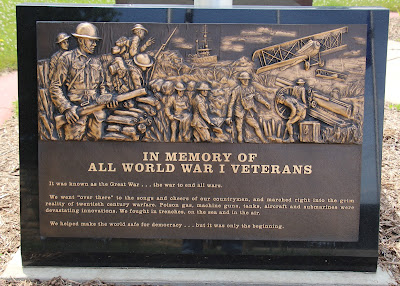 IN MEMORY OF
ALL WORLD WAR I VETERANS

We went "over there" to the songs and cheers of our countrymen, and marched right into the grim reality of twentieth century warfare. Poison gas, machine guns, tanks, aircraft and submarines were devastating innovations. We fought in trenches, on the sea and in the air.

We helped make the world safe for democracy . . . but it was only the beginning. 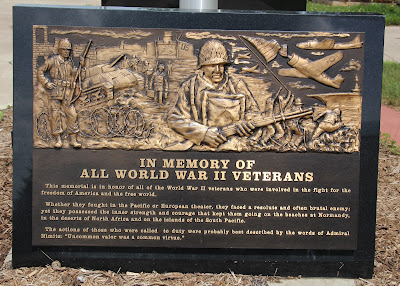 IN MEMORY OF
ALL WORLD WAR II VETERANS


This memorial is in honor of all the World War II veterans who were involved in the fight for the freedom of America and the free world.

Whether they fought in the Pacific or European theater, they faced a resolute and often brutal enemy; yet they possessed the inner strength and courage that kept them going on the beaches at Normandy, in the deserts of North Africa and on the islands of the South pacific.

The actions of those who were called to duty were probably best described by the words of Admiral Nimtiz: "Uncommon valor was a common virtue." 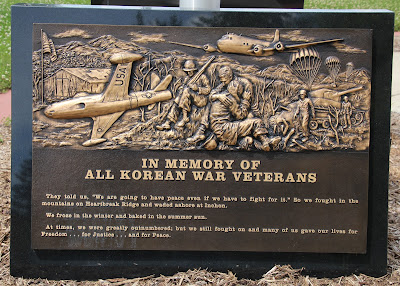 IN MEMORY OF
ALL KOREAN WAR I VETERANS


They told us, "We are going to have peace even if we have to fight for it." So we fought in the mountains on Heartbreak Ridge and waded ashore at Inchon.

We froze in the winter and baked in the summer sun.

At times, we were greatly outnumbered, but we still fought on and many of us gave our lives for Freedom . . . for Justice . . . and for Peace. 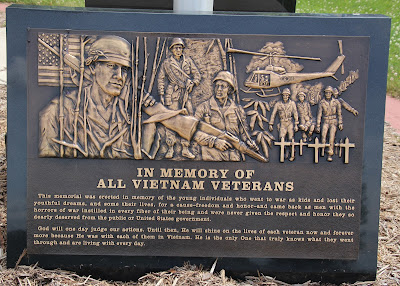 IN MEMORY OF
ALL VIETNAM VETERANS


The memorial was erected in memory of the young individuals who went to war as kids and lost their youthful dreams, and some their lives, for a cause -- freedom and honor -- and came back as men with the horrors of war instilled in every fiber of their being and were never given the respect and honor they so dearly deserved from the public or United States government.

God will one day judge our actions. Until then, He will shine on the lives [sic] of each veteran now and forever more because He was with each of them in Vietnam. He is the only One that truly knows what they went through and are living with every day. 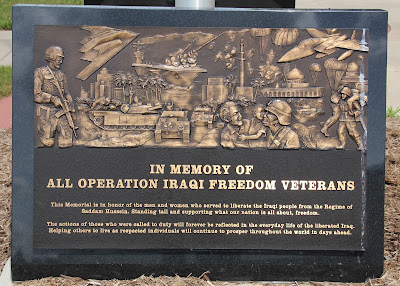 IN MEMORY OF
ALL OPERATION IRAQI FREEDOM VETERANS


This memorial is in honor of the men and women who served to liberate the Iraqi people from the Regime of Sadam Hussein. Standing tall and supporting what our nation is all about, freedom.

The actions of those who were called to duty will forever be reflected in the everyday life of the liberated Iraq. Helping others to live as respected individuals will continue to prosper throughout the world in days ahead. 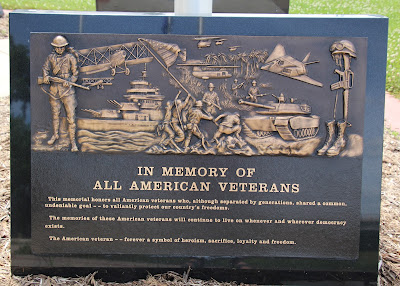 IN MEMORY OF
ALL AMERICAN VETERANS


This memorial honors all American veterans who , although separated by generations, shared a common, undeniable goal -- to valiantly protect our country's freedoms.

The memorials of these American veterans will continue to live on whenever and wherever democracy exists.

The American veteran -- forever a symbol of heroism, sacrifice, loyalty and freedom. 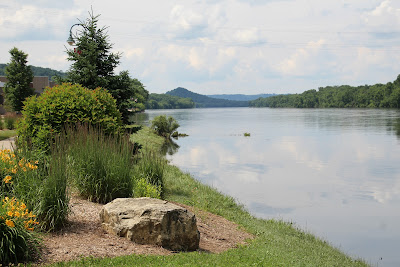 Looking south along the Chippewa River from the memorial location. 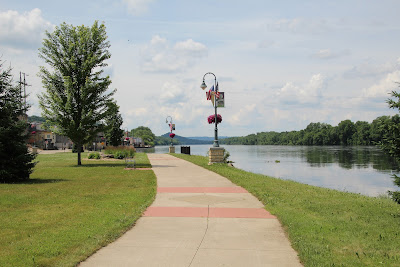 Looking south on the pathway leading away from the memorial. 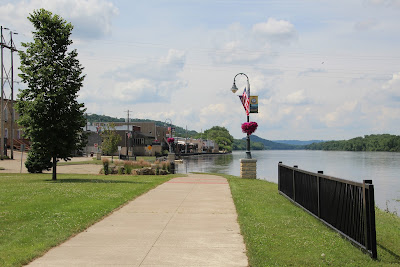 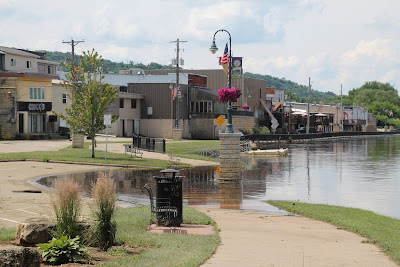 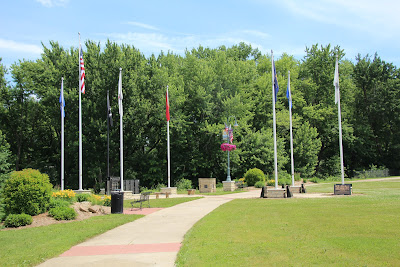 Looking north at the memorial. 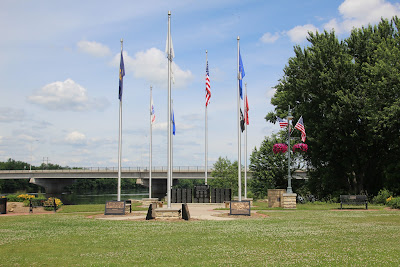 Looking west, with the Chippewa River in the distance. 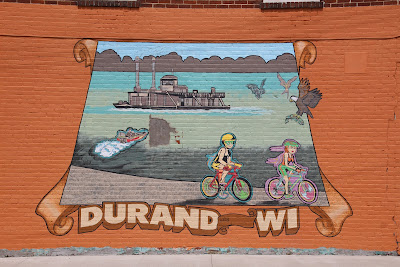 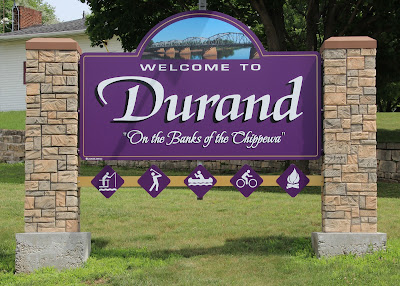 The memorial is located in Durand, Wisconsin.