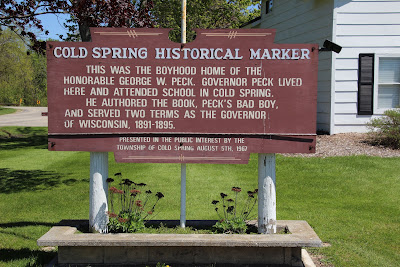 COLD SPRING HISTORICAL MARKER
This was the boyhood home of the
Honorable George W. Peck. Governor Peck lived
here and attended school in Cold Spring.
He authored the book, [sic] Peck's Bad Boy [sic],
and served two terms as the governor
of Wisconsin, 1891-1895.

Presented in the public interest by the
Township of Cold Spring   August 5th, 1967

The marker is located on the grounds of a private home and is accessible from northbound County Highway N, at its intersection with Fremont Road, at or near W4795 Fremont Road, Whitewater (Cold Spring), Wisconsin 53190.

Peck was born in 1840 in Henderson, New York, the oldest of three children of David B. and Alzina P. (Joslin) Peck. In 1843, the family moved to what is now Cold Spring, Wisconsin. Peck attended public school until age 15, when he was apprenticed in the printing trade. He married Francena Rowley in 1860 and they had two sons. In 1863 he enlisted in the 10th Wisconsin Regiment as a private. He was taken prisoner and held at Libby Prison in Richmond, Virginia. After he was released in a prisoner exchange, he was appointed to West Point Military Academy by Abraham Lincoln. He was promoted to lieutenant and served until the regiment mustered out in 1866.

Click here to read more.
The foregoing text is available under the Creative Commons Attribution-ShareAlike License; additional terms may apply.


Henry "Hennery" Peck, popularly known as Peck's Bad Boy, is a fictional character created by George Wilbur Peck (1840–1916). First appearing in the 1883 novel Peck's Bad Boy and His Pa, the Bad Boy has appeared in numerous print, stage, and film adaptations. The character is portrayed as a mischievous prankster, and the phrase "Peck's bad boy" has entered the language to refer to anyone whose mischievous or bad behavior leads to annoyance or embarrassment. Described as "a vicious little swaggerer" and "no more than a callous brute", Hennery's antics were more mean-spirited than those of earlier boyhood characters like Huckleberry Finn, and modern criticism views the violence and racism in the original stories as objectionable or politically incorrect. 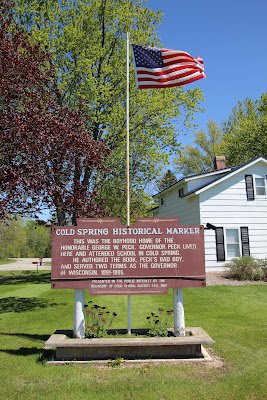 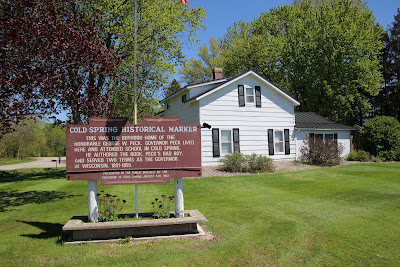 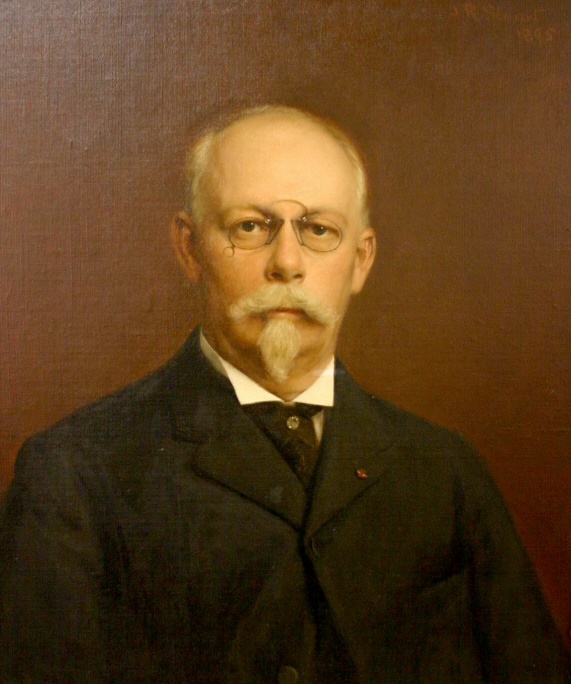 George W. Peck, circa 1890
This work is in the public domain in its country of origin
(United States of America) and other countries and areas
where the copyright term is the author's life plus 70 years or less;
click here for more information. 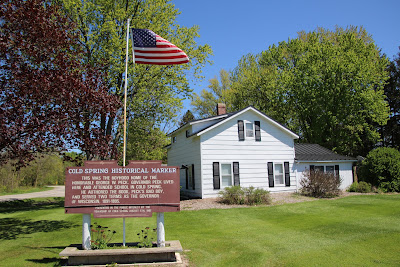 The marker is located in Cold Spring, Wisconsin.