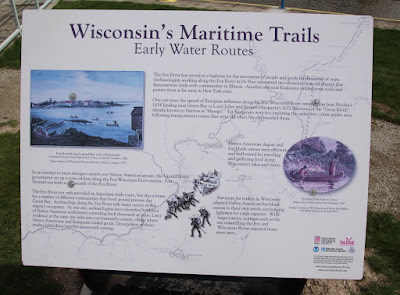 The Fox River has served as a highway for the movement of people and goods for thousands of years. Archaeologists working along the Fox River in De Pere uncovered two-thousand-year-old pottery that demonstrates trade with communities in Illinois. Another site near Kaukauna yielded stone tools and pottery from as far away as New York state.

One can trace the spread of European influence along the Fox-Wisconsin-River system from Jean Nicolet's 1634 landing near Green Bay to Louis Joilet and Jacques Marquette's 1672 discovery of the "Great River," already known to Natives as "Messipi." Yet Europeans were not exploring the unknown -- their guides were following transportation routes that were old when Nicolet traveled them.

In an attempt to exert stronger control over Native American groups, the United States government set up a series of forts along the Fox-Wisconsin River system. Fort Howard was built at the mouth of the Fox River.

The Fox River not only provided an important trade route, but also a home for a number of different communities that lived around present-day Green Bay. Archaeology along the Fox River tells many stories of this region's occupants. At one site, archaeologists have identified evidence of Native American settlements extending back thousands of years. Later evidence at the same site indicates a seventeenth-century village where Native Americans and Europeans traded goods. Descendants of those traders lived there into the nineteenth century.

The marker is located at the De Pere Lock on the east side of the Fox River and is accessible from the De Pere Riverwalk located on the south side of Voyageur Park, 100 William Street, De Pere, Wisconsin 54115.

NOTE: The marker is located on the De Pere Riverwalk, near the historic Lock Tender's House. Park in the parking lot and follow the signs to the Riverwalk. As you approach the Lock Tender's House, you will see the marker on your left. As you can see from the photos, this is a beautiful location to visit, especially when the American White Pelicans have returned from their winter migration south. 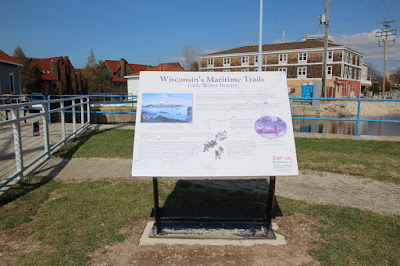 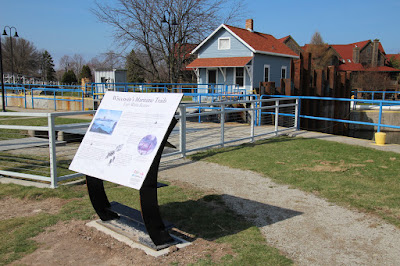 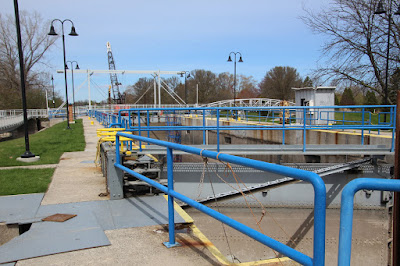 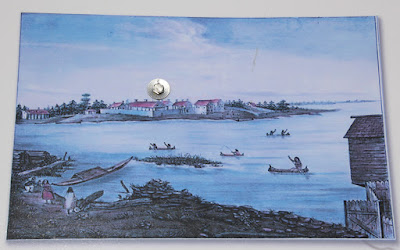 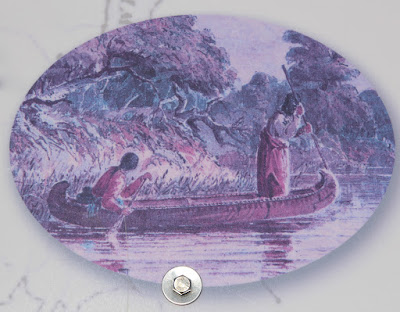 Native American dugout and birchbark canoes
were efficient and well-suited for traveling
and gathering food along Wisconsin's lakes and rivers. European fur traders in Wisconsin adapted Native American
birchbark canoes to their own needs, exchanging
lightness for cargo capacity. With larger canoes, portages
such as the one connecting the Fox and Wisconsin Rivers
required many more men. 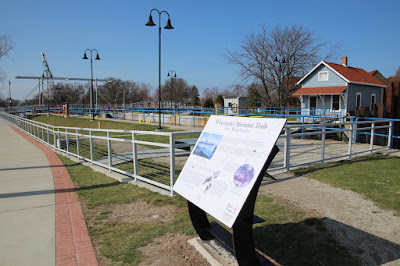 Looking north along the pathway. 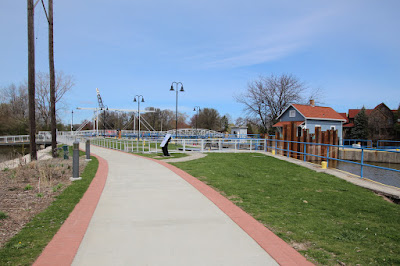 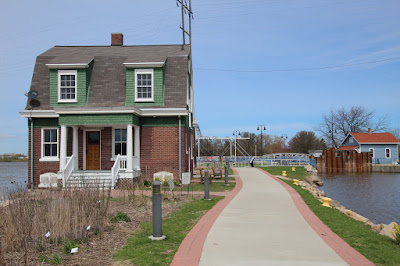 Looking north, with the marker in the distance on the right
and the locktender's house on the left. 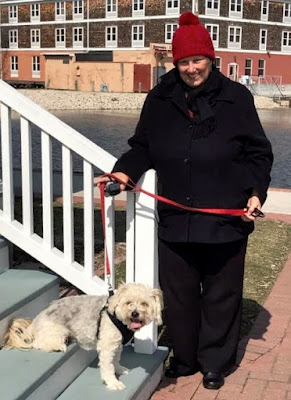 With Dexter on the steps of the locktender's house. 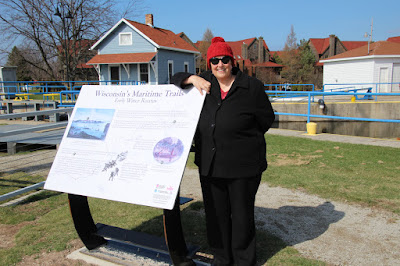 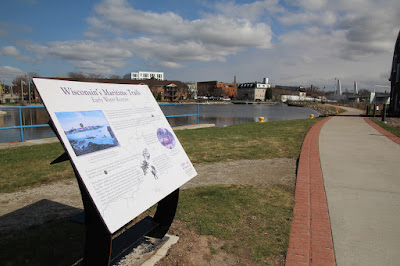 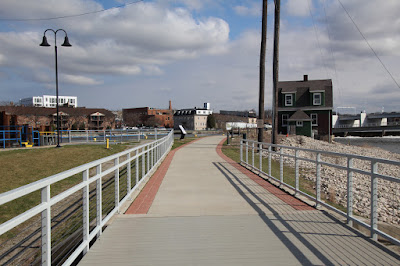 Looking south along the parkway, with the
marker visible in the distance (on the left)
and the historic locktender's house on the right. 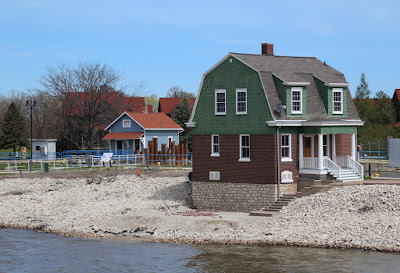 Looking northeast from the Wildlife Viewing Pier
(the marker is on the left, in front of the blue building). 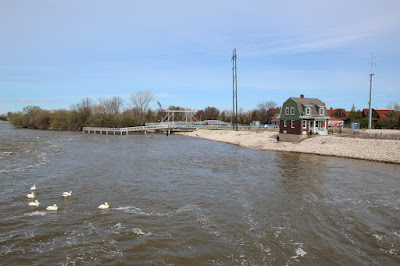 A wider view from the viewing bridge,
looking northeast along the Fox River. 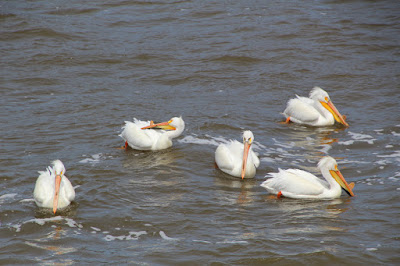 A group of American White Pelicans --
huge birds with a 9-foot wingspan!!! 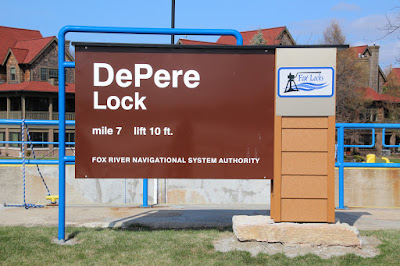 The marker is located at the De Pere Lock. 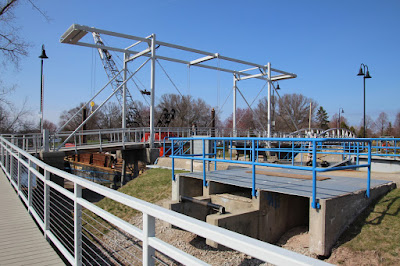 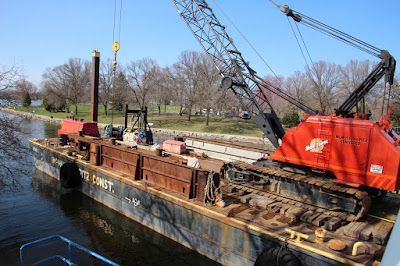 This boat's been encamped for repairs to the lock. 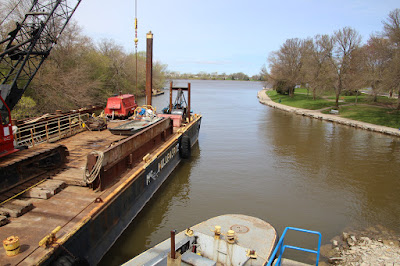 Looking west from the lock out to the Fox River. 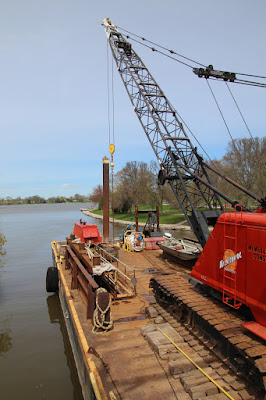 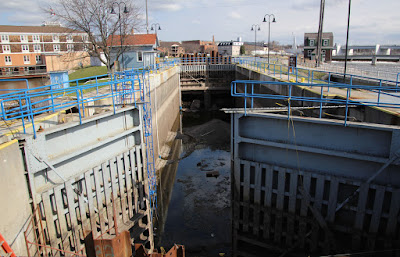 Looking into the empty lock. 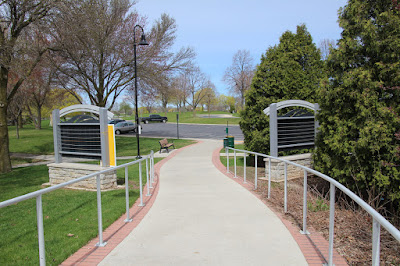 Plenty of parking to access the marker, De Pere Riverwalk,
and the Wildlife Viewing Pier (with Voyageur Park in the background). 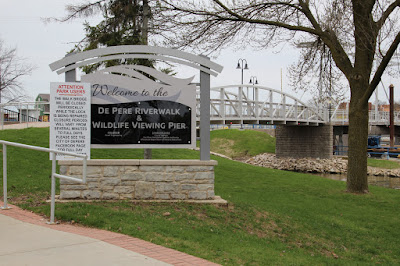 The marker is located along the De Pere Riverwalk
(just follow the path; it's impossible to miss the marker next to the lock). 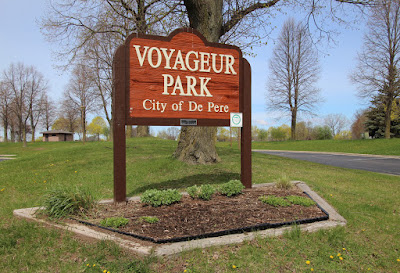 The marker is located at Voyageur Park in De Pere, Wisconsin