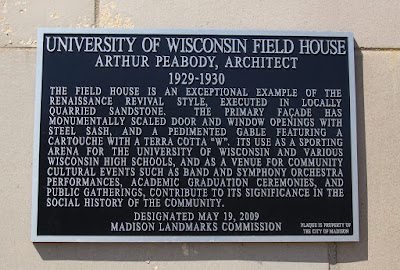 The Field House is an exceptional example of the Renaissance Revival style, executed in locally quarried sandstone. The primary facade has monumentally scaled door and window openings with steel sash, and a pedimented gable featuring a cartouche with a terra cotta "W". Its use as a sporting arena for the University of Wisconsin and various Wisconsin high schools, and as a venue for community cultural events such as band and symphony orchestra performances, academic graduation ceremonies, and public gatherings, contributes to its significance in the social history of the community.

The marker is affixed to the Gate B entrance to the University of Wisconsin Field House and is accessible from Parking Lot 18 of Camp Randall Stadium on southbound Monroe Street, south of its intersection with North Randall Avenue, at or near 1450 Monroe Street, Madison, Wisconsin 53711.

Until the construction of the Field House in 1929, the Badger basketball team played in the University Armory and Gymnasium, popularly known as the Old Red Gym, which held only 2,240 spectators.

When George Little became the university’s athletic director in 1925, he made the construction of a new field house a priority. The resulting facility, located just south of Camp Randall Stadium, has become an important symbol of the university, built by the campus architect. The sandstone-rubble structure expresses a simplified Renaissance Revival style through differentiated treatment of the first and second stories. The second level is particularly attractive, with its tall arched windows, broad flat pilasters, and stone balconets below the windows on either end. Overhead is the wide gable, ornamented with the shield that is the university logo and separated from the rest of the façade by a string course of wave and shield motifs. Bedford limestone and terracotta trim provide contrasting texture and color.

After the building's dedication in December 1930, it hosted not only basketball but also track and field events, wrestling, and other athletics, along with cultural events and the university's graduation exercises. To accommodate larger crowds, a second balcony was added in 1936, boosting seating capacity from 8,600 to 12,000. In January 1998, Badger basketball moved to the larger field house at the Kohl Center, but the Field House continues to host the women’s volleyball team. 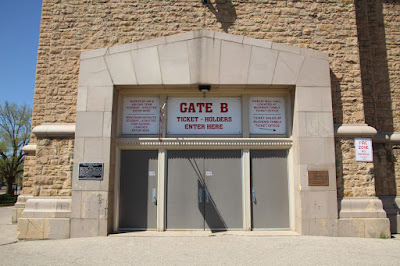 The marker is on the left of the Gate B entrance. 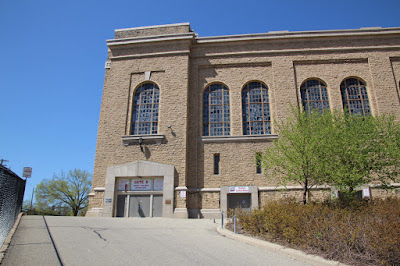 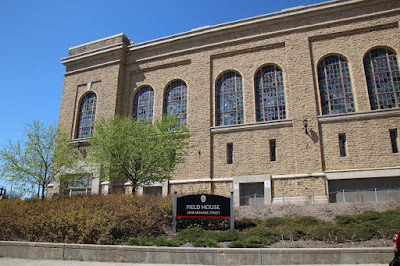 The east side of the Field House, adjacent to Parking Lot 18. 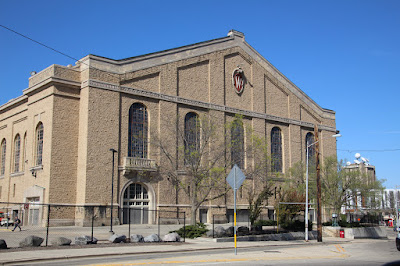 The front of the Field House, facing Regent Street.

The Field House and marker are located on the UW-Madison
campus in Madison, Wisconsin.