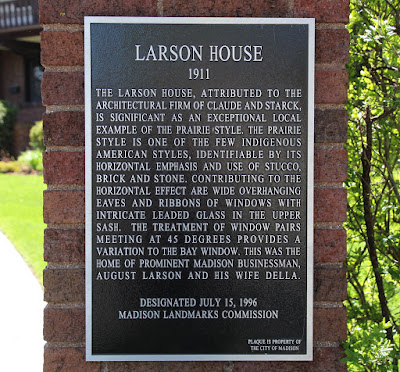 The Larson House, attributed to the architectural firm of Claude and Starck, is significant as an exceptional local example of the Prairie Style. The Prairie Style is one of the few indigenous American styles, identifiable by its horizontal emphasis and use of stucco, brick and stone. Contributing to the horizontal effect are wide overhanging eaves and ribbons of windows with intricate leaded glass in the upper sash. The treatment of window pairs meeting at 45 degrees provides a variation to the bay window. This was the home of prominent Madison businessman, August Larson and his wife Della.

Larson House is located on the southwest corner of the intersection of Grant Street and Jefferson Street, at or near 1006 Grant Street, Madison, Wisconsin 53711.

The property is listed on the National Register of Historic Places (as of May 19, 1994)

The marker is No. 136 in a series of markers erected by the Madison Landmarks Commission. 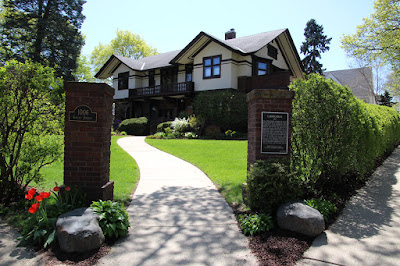