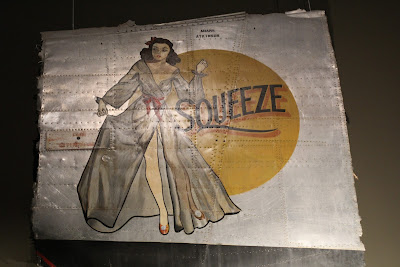 Squeeze refers to the slang for "contraband" often carried by crews flying the Hump route over the Himalayas. Like Squeeze, more than half of the nose art pieces in the museum's collection decorated bombers that flew in the China-Burma-India Theatre. Many of the bomber names and imagery depict the places and experiences of the aircrews that served there, such as Hump Time, Mama Foo Foo and Sack Time.

Squeeze reflects the incredible influence of the pin-up girl -- a popular art form in the '30s and '40s. Pin-ups filled the pages of magazines, calendars, advertisements and best-selling novels. Inspired by these images, nose art artists often painted the pin-ups on their aircraft. Here, Squeeze was inspired by a calendar pin-up painted by Art Frahm. Other artists took their cue from the popular work of Alberto Vargas, Gil Elvgren and George Petty.

Squeeze is the first restored of the museum's 33 nose art pieces. Beginning in November 1997, Richard Trela, the conservator of the Panhandle-Plains Historical Museum, analyzed, cleaned and conserved Squeeze in nine months. Upon grand opening of the new Aviation Art Gallery and Conservation Lab in 2001, the remainder of the nose art restoration will be accomplished here at the Airpower Museum. 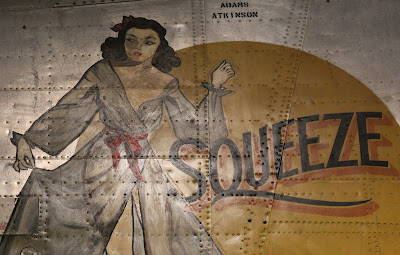 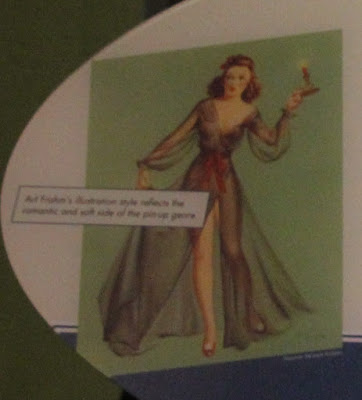 Art Frohm's illustrative style reflects the
romantic and soft side of the pin-up genre.

Each flaking paint chip was heated
and reattached with a special bonding
agent called Acryloid B-72.

Squeeze is part of the Commemorative Air Force
WWII Nose Art Collection, on display during 2016
at the EAA AirVenture Museum in Oshkosh, Wisconsin.