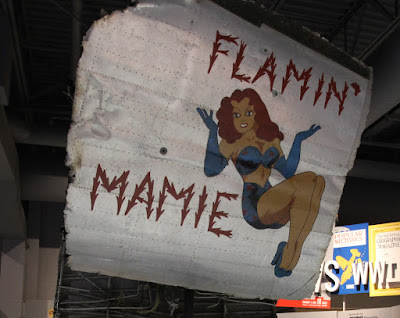 Named after a 1925 song of the same name, Flamin' Mamie is one of many nose art paintings inspired by popular music. Like many blues songs, the lyrics tell of a devastatingly beautiful woman whose good looks are the source of trouble for the men she meets. Capitalizing on the theme of dangerous power implied in the song, the unknown artist might have wished the same destructive power for the aircraft.

Gorden Schafer, Flamin' Mamie's co-pilot, missed one of the crew's missions after he developed a severe inner ear infection. The Flight Surgeon suggested he get surgery, bringing an end to his flying career. Instead, Schafer was the first in his squadron to try the new drug penicillin, which quickly cured the infection. Developed during WWII, penicillin allowed Army physicians to control many  infections without side effects. In 1942, Army physicians began using the drug extensively in the field.

Wikipedia: Flamin' Mamie
Paul Whiteman wrote "Flamin' Mamie" in 1925 with Fred Rose as a "Fox Trot Song" on Jazz Age themes relying on the 1920s image of the vamp: "A Red Hot Stepper". It was one of the top hits of 1925. 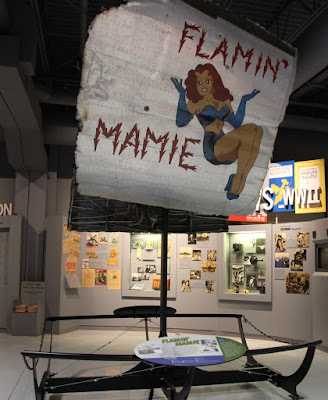 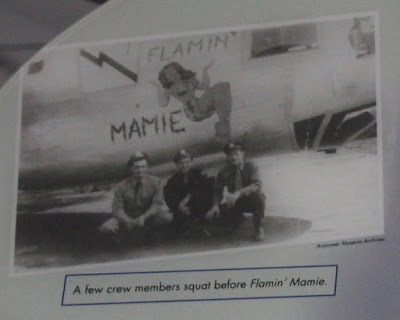 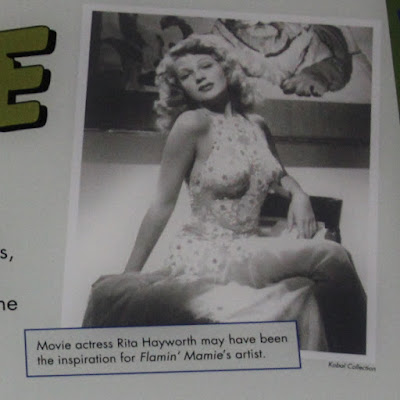 Movie actress Rita Hayworth may have been
the inspiration for Flamin' Mamie's artist.

Flamin' Mamie is part of the Commemorative Air Force
WWII Nose Art Collection, on display during 2016
at the EAA Air Venture Museum in Oshkosh, Wisconsin.