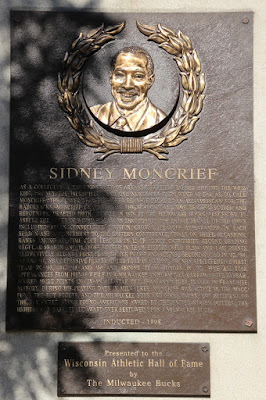 As a collegian at the University of Arkansas writers tabbed him "Sid the Whiz Kid", "Sidney the Incredible", and one newspaper even went as far as to call Moncrief "The Player of Ages Rather Than of Decade." An All-American for the Razorbacks, Moncrief graduated as the school's all-time leading scorer and rebounder. Drafted fifth overall in 1979 by the Milwaukee Bucks. Proceeded to assure the Bucks of winning seasons throughout the entire decade of the 1980's including seven consecutive division crowns, playoff appearances in each season and advancement to the Eastern Conference Finals on three occasions. Ranks among all-time club leaders in 12 of 17 key categories. Second leading regular season and playoff scorer in team history with 11,594 and 1,451 points respectively. All-NBA First Team choice in 1983 and All-NBA Second Squad in '82, '84, '85 and '86. NBA Defensive Player of the Year in 1983 and '84, NBA All-Defensive First Team in '83, '84, '85 and '86 and Second Team Honors in '82. Five All-Star appearances from 1982-86 while in a Milwaukee uniform ties Kareem Abdul-Jabbar. Scored more points (20) in an All-Star tilt than any other player in franchise history. During his playing days in Milwaukee, Moncrief was active in the MACC Fund, the Boy Scouts, and the Milwaukee Boys and Girls Clubs. 1987 Recipient of the Ten Outstanding Young Americans Award by the United States Jaycees, the highest non-basketball award ever bestowed upon a Milwaukee Buck. Inducted - 1998