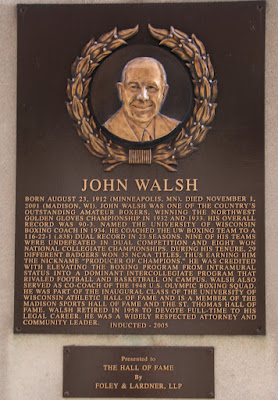 Born August 23, 1912 (Minneapolis, MN), died November 1, 2001 (Madison, WI). John Walsh was one of the country's outstanding amateur boxers, winning the Northwest Golden Gloves Championship in 1932 and 1933. His overall record was 90-3. Named the University of Wisconsin boxing coach in 1934, he coached the UW boxing team to a 116-22-1 (.838) dual record in 23 seasons. Nine of his teams were undefeated in dual competition and eight won National Collegiate Championships. During his tenure, 29 different Badgers won 35 NCAA titles, thus earning him the nickname "Producer of Champions." He was credited with elevating the boxing program from intramural status into a dominant intercollegiate program that rivaled football and basketball on campus. Walsh also served as co-coach of the 1948 U.S. Olympic Boxing Squad. He was part of the inaugural class of the University of Wisconsin Athletic Hall of Fame and is a member of the Madison Sports Hall of Fame and the St. Thomas Hall of Fame. Walsh retired in 1958 to devote full-time to his legal career. He was a widely respected attorney and community leader.