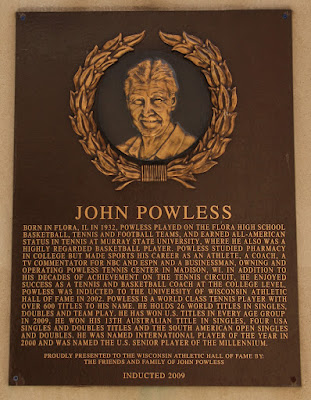 Born in Flora, IL in 1932, Powless played on the Flora High School basketball, tennis and football teams, and earned All-American status in tennis at Murray State University, where he also was a highly regarded basketball player. Powless studied pharmacy in college but made sports his career as an athlete, a coach, a TV commentator for NBC and ESPN and a businessman, owning and operating Powless Tennis Center in Madison, WI. In addition to his decades of achievement on the tennis circuit, he enjoyed success as a tennis and basketball coach at the college level. Powless was inducted to the University of Wisconsin Athletic Hall of Fame in 2002. Powless is a world class tennis player with over 600 titles to his name. He holds 26 world titles in singles, doubles and team play. He has won U.S. titles in every age group. In 2009, he won his 13th Australian title in singles, four USA singles and doubles titles and the South American Open singles and doubles. He was named International Player of the Year in 2000 and was named the U.S. Senior Player of the Millennium. Inducted 2009.