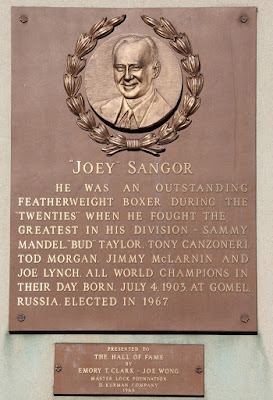 He was an outstanding featherweight boxer during the "twenties" when he fought the greatest in his division - Sammy Mandel, "Bud" Taylor, Tony Canzoneri, Tod Morgan, Jimmy McLarnin and Joe Lynch, all World Champions in their day. Born, July 4, 1903, at Gomel, Russia. Elected in 1967.

The marker is in this cluster -- top row, second from the left.