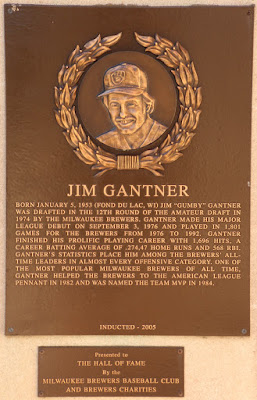 Born January 5, 1953 (Fond du Lac, WI) Jim "Gumby" Gantner was drafted in the 12th round of the amateur draft in 1974 by the Milwaukee Brewers. Gantner made his Major League debut on September 3, 1976 and played in 1,801 games for the Brewers from 1976 to 1992. Gantner finished his prolific playing career with 1,696 hits, a career batting average of .274, 47 home runs and 568 RBI. Gantner's statistics place him among the Brewers' all-time leaders in almost every offensive category. One of the most popular Milwaukee Brewers of all time, Gantner helped the Brewers to the American League Pennant in 1982 and was named the Team MVP in 1984.