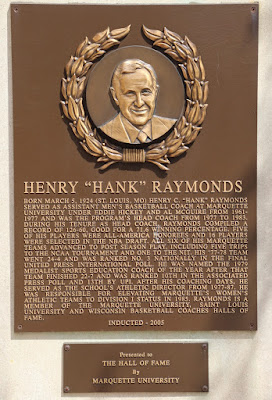 Born March 5, 1924 (St. Louis, MO) [sic] Henry C. "Hank" Raymonds served as assistant men's basketball coach at Marquette University under Eddie Hickey and Al McGuire from 1961-1977 and was the program's head coach from 1977 to 1983. During his tenure as head coach, Raymonds compiled a record of 126-60, good for a 71.6 winning percentage. Five of his players were all-America [sic] honorees and 16 players were selected in the NBA draft. All six of his Marquette teams advanced to post season [sic] play, including five trips to the NCAA tournament and one to the NIT. His '77-'78 team went 24-4 and was ranked No. 3 nationally in the final United Press International poll. He was named the 1979 Medalist Sports Educational Coach of the Year after that team finished 22-7 and was ranked 10th in the Associated Press Poll and 13th by the UPL after his coaching days. He served as the school's athletic director from 1977-87. He was responsible for elevating Marquette's women's athletic teams to Division I status in 1985. Raymonds is a member of the Marquette University, Saint Louis University [sic] and Wisconsin Basketball Coaches Halls of Fame.