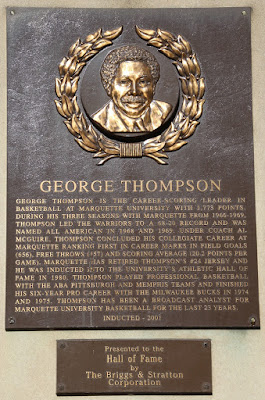 George Thompson is the career-scoring leader in basketball at Marquette University with 1,773 points. During his three seasons with Marquette from 1966-1969, Thompson led the warriors to a 68-20 record and was named All American in 1968 and 1969. Under coach Al McGuire, Thompson concluded his collegiate career at Marquette ranking first in career marks in field goals (656), free throws (457) and scoring average (20.2 points per game). Marquette has retired Thompson's #24 jersey and he was inducted into the University's Athletic Hall of Fame in 1980. Thompson played professional basketball with the ABA Pittsburgh and Memphis teams and finished his six-year pro career with the Milwaukee Bucks in 1974 and 1975. Thompson has been a broadcast analyst for Marquette University basketball for the last 23 years.