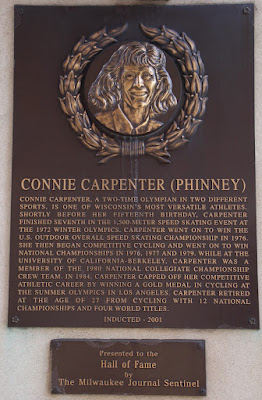 Connie Carpenter, a two-time Olympian in two different sports, is one of Wisconsin's most versatile athletes. Shortly before her fifteenth birthday, Carpenter finished seventh in the 1,500-meter speed skating event at the 1972 Winter Olympics. Carpenter went on to win the U.S. Outdoor Overall Speed Skating Championship in 1976. She then began competitive cycling and went on to win National Championships in 1976, 1977 and 1979. While at the University of California-Berkeley, Carpenter was a member of the 1980 National Collegiate Championship crew team. In 1984, Carpenter capped off her competitive athletic career by winning a Gold Medal in cycling at the Summer Olympics in Los Angeles. Carpenter retired at the age of 27 from cycling with 12 National Championships and four world titles. Inducted - 2001.