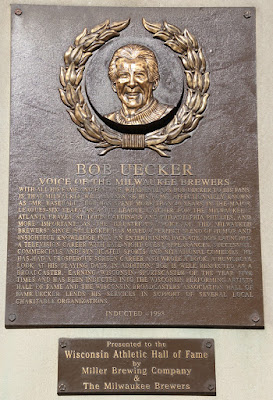 With all his fame and fortune, what endears Bob Uecker to his fans is that Milwaukee will always be his home. Affectionately known as "Mr. Baseball," Bob has spent more than 40 years in the major leagues - six years as a big league catcher for the Milwaukee-Atlanta Braves, St. Louis Cardinals and Philadelphia Phillies, and more important, as the illustrious "Voice of the Milwaukee Brewers" since 1971. Uecker has mixed a perfect blend of humor and insightful knowledge into an entertaining package. Bob launched a television career with late night guest appearances, successful commercials and syndicated sports and situational-comedies. He has had a prosperous screen career and wrote a book, a humorous look at his playing days. In addition, Bob is well respected as a broadcaster, earning Wisconsin Sportscaster of the Year five times and has been inducted into the Wisconsin Performing Artists Hall of Fame and the Wisconsin Broadcasters Association Hall of Fame. Uecker lends his services in support of several local charitable organizations.

Inducted - 1998
The marker is located at the Wisconsin Athletic Hall of Fame at the UW-Milwaukee Panther Arena, and is accessible from southbound North 4th Street, between West State Street (to the north) and West Kilbourn Avenue (to the south), at or near 400 West Kilbourn Avenue, Milwaukee, Wisconsin 53203.