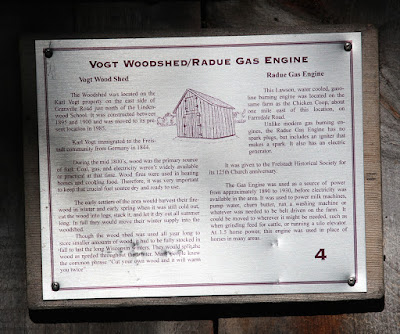 The Woodshed was located on the Karl Vogt property on the east side of Granville Road just north of the Lindenwood School. It was constructed between 1895 and 1900 and was moved to its present location in 1985.

Karl Vogt immigrated to the Freistadt community from Germany in 1844.

During the mid 1800's, wood was the primary source of fuel. Coal, gas, and electricity weren't widely available or practical at that time. Wood fires were used in heating homes and cooking food. Therefore, it was very important to keep that crucial fuel source dry and ready to use.

The early settlers of the area would harvest their firewood in winter and early spring when it was still cold out, cut the wood into logs, stack it, and let it dry out all summer long. In fall they would move their winter supply into the woodshed.

Though the wood shed was used all year long to store smaller amounts of wood, it had to be fully stocked in fall to last the long Wisconsin winters. They would split the wood as needed throughout the winter. Many people knew the common phrase "Cut your own wood and it will warm you twice".

This Lawson, water cooled, gasoline burning engine was located on the same farm as the Chicken Coop, about one mile east of this location, on Farmdale Road.

Unlike modern gas burning engines, the Radue Gas Engine has no spark plugs, but includes an igniter that makes a spark. It also has an electric generator.

It was given to the Freistadt Historical Society for its 125th Church anniversary.

The Gas Engine was used as a source of power from approximately 1890 to 1930, before electricity was available in the area. It was used to power milk machines, pump water, churn butter, run a washing machine or whatever was needed to be belt driven on the farm. It could be moved to wherever it might be needed, such as when grinding feed for cattle, or running a silo elevator. At 1.5 horse power, this engine was used in place of horses in many areas. 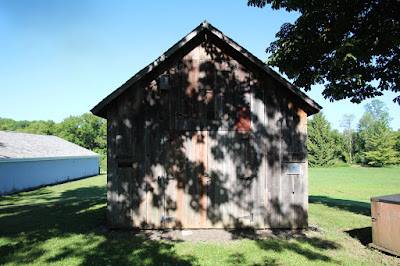 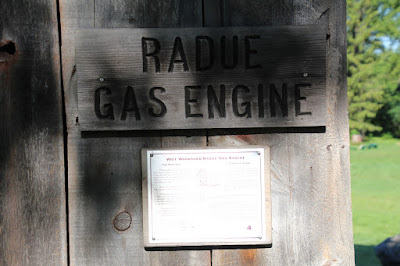 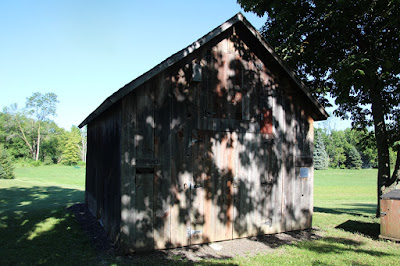