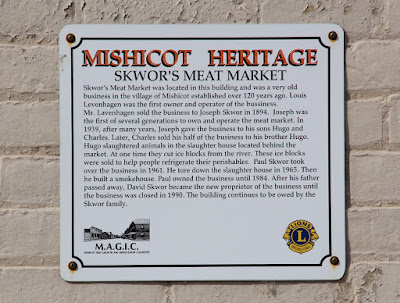 Skwor's Meat Market was located in this building and was a very old business in the village of Mishicot established over 120 years ago. Louis Levenhagen was the first owner and operator of the business. Mr. Lavenhagen sold the business to Joseph Skwor in 1894. Joseph was the first of several generations to own and operate the meat market. In 1939, after many years, Joseph gave the business to his sons Hugo and Charles. Later, Charles sold his half of the business to his brother Hugo. Hugo slaughtered animals in the slaughter house located behind the market. At one time they cut ice blocks from the river. These ice blocks were sold to help people refrigerate their perishables. Paul Skwor took over the business in 1961. He tore down the slaughter house in 1965. Then he built a smokehouse. Paul owned the business until 1984. After his father passed away, David Skwor became the new proprietor of the business until the business was closed in 1990. The building continues to be owned by the Skwor family. 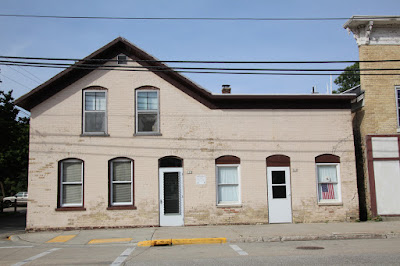 The marker is affixed to the facade,
to the right of the door on the left.