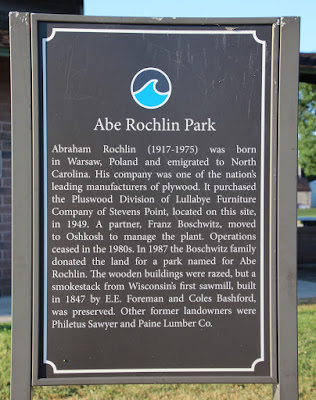 Abraham Rochlin (1917-1975) was born in Warsaw, Poland and emigrated to North Carolina. His company was one of the nation's lending manufacturers of plywood. It purchased the Pluswood Dvision of Lullabye Furniture Company of Stevens Point, located on this site, in 1949. A partner, Franz Boschwitz, moved to Oshkosh to manage the plant. Operations ceased in the 1980s. In 1987 the Boschwitz family donated the land for a park named for Abe Rochlin. The wooden buildings were razed, but a smokestack from Wisconsin's first sawmill, build in 1947 by E.E. Foreman and Coles Bashford, were preserved. Other former landowners were Philetus Sawyer and Paine Lumber Co.

The marker is located adjacent to the parking lot at Abe Rochlin Park, and is accessible from northbound North Sawyer Street, south of its intersection with Oshkosh Avenue / Wisconsin Highway 21, Oshkosh, Wisconsin 54902. 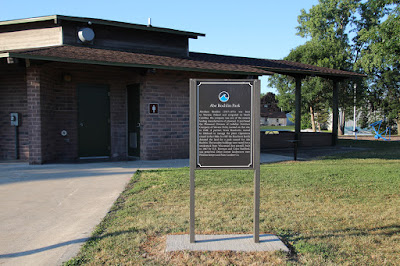 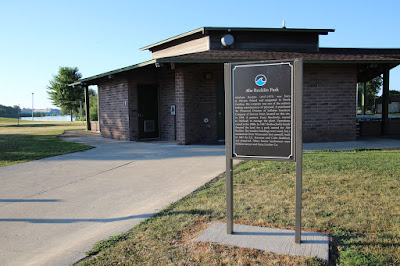 With the Fox River visible in the distance, to the left. 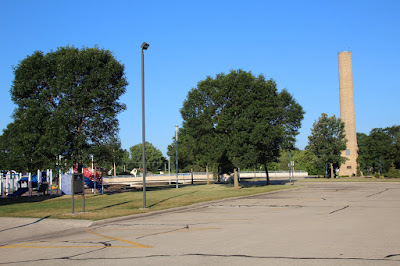 The referenced smokestack; the marker is visible
to the left of the light pole.
The marker is located in Oshkosh, Wisconsin.