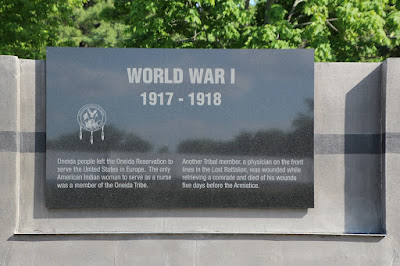 Oneida people left the Oneida Reservation to serve the United States in Europe. The only American Indian woman to serve as a nurse was a member of the Oneida Tribe.

Another Tribal member, a physician on the front lines in the Lost Battalion, was wounded while retrieving a comrade and died of his wounds five days before the Armistice.

NOTE: The content of this marker may be inaccurate, according to this website, 14 Native American women served with the Army Nurse Corps during World War I; two served overseas, including Oneida Tribe member Mrs. Cora E. Sinnard (who died in 1996 at the age of 106!):