Cave of the Mounds: Take a Trip Back in Time . . . Wisconsin's Oldest Classroom! 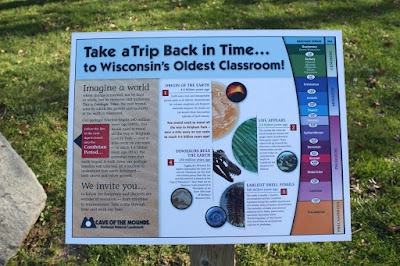 Take a Trip Back in Time...
to Wisconsin's Oldest Classroom!

where change is marked, not by days or weeks, but by centuries and millennia. This is Geologic Time, the vast boundaries by which the growth and maturity of the earth is measured.

to follow the footprints and discover the wonder of evolution -- from trilobites to tyrannosaurs. Take a trip through time and walk our line! 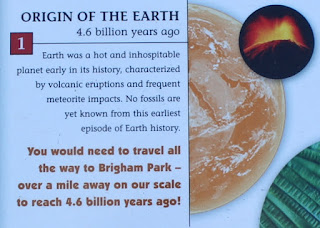 ORIGIN OF THE EARTH
4.6 billion years ago
➀ Earth was a hot and inhospitable
planet early in its history, characterized
by volcanic eruptions and frequest
meteorite impacts. No fossils are
yet known from this earliest
episode of Earth history.
You would need to travel all
the way to Brigham Park --
over a mile way on our scale
to reach 4.6 billion years ago! 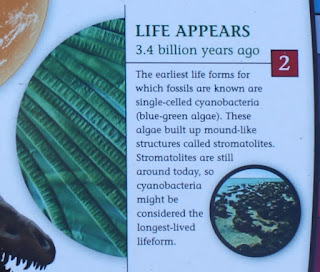 LIFE APPEARS
3.4 billion years ago
➁ The earliest life forms for
which fossils are known are
single-celled cyanobacteria
(blue-green algae). these
algae built up mound-like
structures called stromatolites.
Stromatolites are still
around today, so cyanobacteria
might be considered the
longest-lived lifeform. 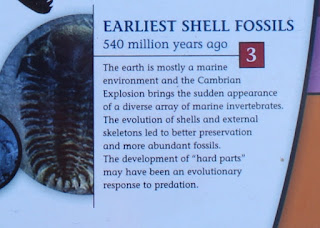 EARLIEST SHELL FOSSILS
540 million years ago
➂ The earth is mostly a marine
environment and the Cambrian
Explosion brings the sudden appearance
pf a diverse array of marine invertebrates.
The evolution of shells and external
skeletons led to better preservation
and more abundant fossils.
the development of "hard parts"
may have been an evolutionary
response to predation. 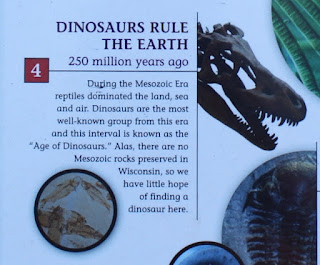 DINOSAURS RULE THE EARTH
250 million years ago
➃ During the Mesozioc Era
reptiles dominated the land, sea
and air. Dinosaurs are the most
well-known group from this ear
and this interval is known as the
"Age of Dinosaurs." Alas, there are no
Mesozoic rocks preserved in
Wisconsin, so we
have a little hope
of finding a dinosaur here. 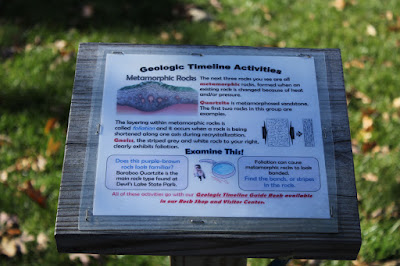 These cool learning activities markers are next to the marker. 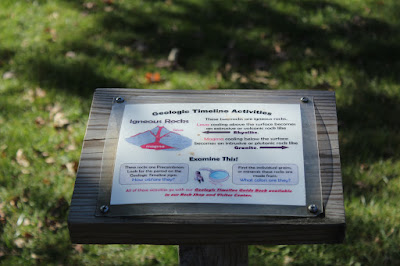 This path (adjacent to the parking lot) leads to the marker's location
(the marker is visible on the left, next to the boulder).