Cave of the Mounds: Paleozoic Era 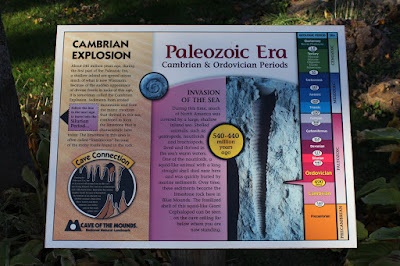 About 450 million years ago, during the first part of the Paleozoic Era, a shallow inland sea spread across much of what is now Wisconsin. Because of the sudden appearance of diverse fossils in rocks of this age, it is cometimes called the Cambrian Explosion. Sediments from eroded mountains and from the many creatures that thrived in the sea, combined to form the limestone that is characteristic here today. The limestone in this area is often called "fossiliferous" because of the many fossils found in the rock.

Follow the line to the next time to travel into the Silurian Period.

INVASION OF THE SEA

During this time, much of North America was covered by a large, shallow inland sea. Shelled animals, such as gastropods, nautiloids and brachiopods, lived and thrived in the sea's warm waters. One of the nautiloids, a squid-like animal with a long straing shell died hear here and was quickly buried by marine sediments. Over time, these sediments became the limestone rock here in Blue Mounds. The fossilized shell of the squid-like Giant Cephalopod can be seen on the cave ceiling for far below where you are now standing. 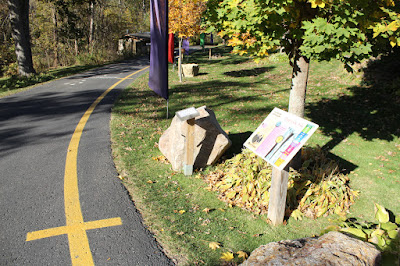 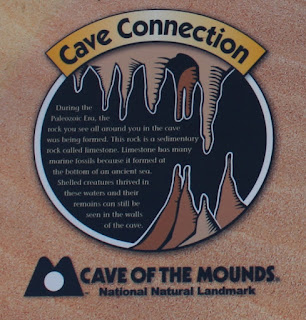 Cave Connection
During the Paleozoic Era, the rock you see all around you in the cave was being formed. This rock is a sedimentary rock called limestone. Limestone has many marine fossils because it formed at the bottom of an ancient sea. Shelled creatures thrived in these waters and their remains can still be seen in the walls of the cave. 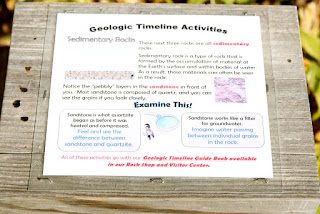 This cool learning activity marker is next to the Paleozoic Era marker.

This path (adjacent to the parking lot) leads to the marker's location
(the marker is visible on the right, between the colored flags).