This memorial is dedicated to all officers
and enlisted men of "C" Company, 18th Infantry
Battalion, United States Marine Corps Reserve,
Milwaukee, Wisconsin, who were called
to serve their country during the Korean War 1950 - 1953 [sic]
Though it has been called "The Forgotten War"
we will never forget, Semper Fidelis.
Presented by Sergeant Major Michael K [sic] Stelzel, USMC -- Retired.

The memorial is mounted to one of the pillars inside
the Milwaukee County War Memorial Center. 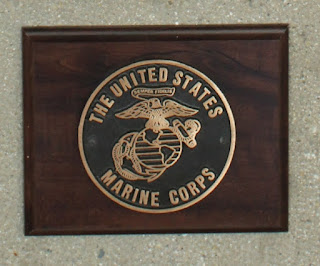