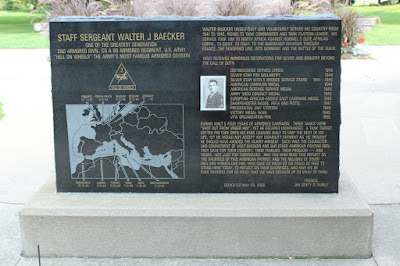 Walter Baecker unselfishly and voluntarily served his country from
1941 to 1945, rising to tank commander and tank platoon leader. His
service took him to North Africa against Rommel's elite African
Corps., to Sicily, to Italy, to the Normandy invasion through
France, the Sengfried Line, into Germany and the Battle of the Bulge.

During Walt's four years of armored campaign, three tanks were
"shot out from under him", yet he escaped unwounded. A tank turret
cotter pin tore open his knee causing walk to limp the rest of his
life, yet he would not accept any disability payment as he thought
he should have avoided the injury himself. Such was the character
and commitment of Walk Baecker and our other American fighting men.
They gave for their country, their families, their freedom -- and
yours. Not just for themselves. May you who read this reflect on
the sacrifice of this American patriot, and the millions of other
men and women like him, who gave so much so we could be free to
stand here today, to reflect on their sacrifices, and may we be
ever grateful for so much that we have because of so many of them.

Walt received numerous decorations for service and bravery beyond the call of duty:

This media file in the public domain.
Click here for more information.