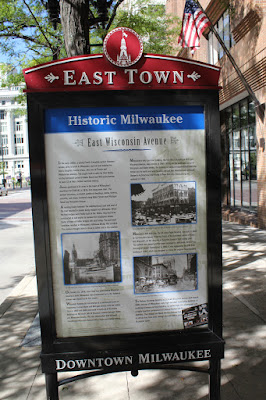 In the early 1800s, a young French Canadian named Solomon Juneau came to work in Milwaukee and met and married his boss’s daughter, Josette Vieau, who was of French and Menominee ancestry. The couple built a cabin for their family on the northwest corner of Water Street and Wisconsin Avenue. At least 13 of their children survived infancy.

Juneau purchased 133 acres in the heart of Milwaukee’s downtown for $165.81 in 1835, dirt cheap even then. The earliest structures, a random jumble of dwellings, stores, taverns, sawmills, and shops, clustered along Water Street near Michigan Street and Wisconsin Avenue.

A running rivalry between the neighborhoods east and west of the river resulted in streets being mapped out differently. When the first bridges were finally built in the 1840s, they had to be constructed at odd angles to connect the misaligned streets. Some of these off-kilter bridges still exist today. The east-west hostilities resulted in Milwaukee’s infamous Bridge War of 1845. The violence brought about a truce in 1846, and a city resulted.

On January 31, 1846, more than two years before Wisconsin became a state, Milwaukee was incorporated as a city. Solomon Juneau was elected as its first mayor.

Milwaukee’s only cast-iron building, the Iron Block Building at 205 East Wisconsin Avenue, was erected in 1860. Sitting on the southeast corner of Wisconsin and Water streets, the building is framed in conventional brick and timber but its north and west facades are cast iron manufactured at Daniel Badger’s Architectural Iron Works in New York City. The building was restored in 1984.

Milwaukee’s first high-rise, the 14-story Pabst Building, was built in 1892 by German-born brewer Frederick Pabst at the northwest corner of Water and Wisconsin, on the very site of Solomon Juneau’s first trading post. The roofline was altered and the tower removed in later years, diminishing the original design. Demolished in 1980, it was replaced by the 100 East building in 1988, which was designed to mimic the original Pabst Building.

The Railway Exchange Building at 233 East Wisconsin Avenue was built in 1899-1900. It was one of Milwaukee’s early high-rise steel frame office buildings. A traditional Commercial Style building, 12 stories high, it is ornamented with a highly inventive combination of Classic Revival and Baroque design elements. The Chicago and North Western Railway had its offices here from 1901 through the mid-1940s, giving the structure its popular name.

This 1905 photo shows a pleasure boat passing alongside
the Pabst Building at Water and Wisconsin. 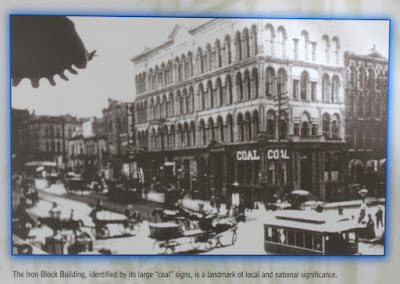 The Iron Block Building, identified by its large "coal" sign,
it a landmark of local and national significance. 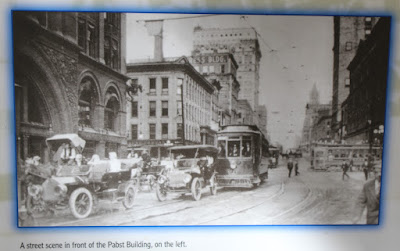 A street scene in front of the Pabst Building, on the left. 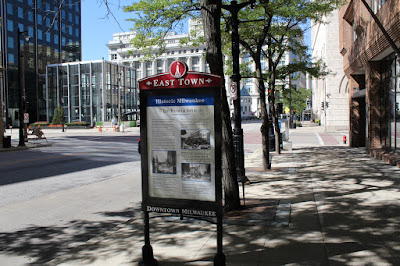