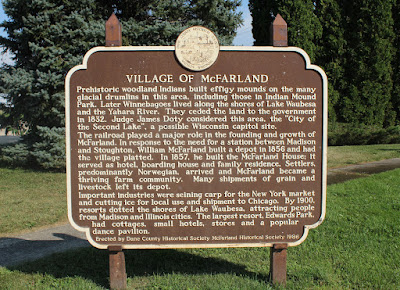 Prehistoric woodland Indians built effigy mounds on the many glacial drumlins in this area, including those in Indian Mound Park. Later Winnebagoes lived along the shores of Lake Waubesa and the Yahara River. They ceded the land to the government in 1832. Judge James Doty considered this area, the "City of the Second Lake", a possible Wisconsin capitol site.

The railroad played a major role in the founding and growth of McFarland. In response to the need for a station between Madison and Stoughton, William McFarland built a depot in 1856 and had the village platted. In 1857, he built McFarland House; it served as hotel, boarding house and family residence. Settlers, predominantly Norwegian, arrived and McFarland became a thriving farm community. Many shipments of grain and livestock left its depot.

Important industries were seining carp for the New York market and cutting ice for local use and shipment to Chicago. By 1900, resorts dotted the shores of Lake Waubesa, attracting people from Madison and Illinois cities. The largest resort, Edwards Park, had cottages, small hotels, stores and a popular dance pavilion.

The marker is located on northbound Exchange Street, just north of its intersection with Bashford Street, McFarland, Wisconsin 53558.

This marker is No. 22 in the Dane County Historical Society Markers Series. 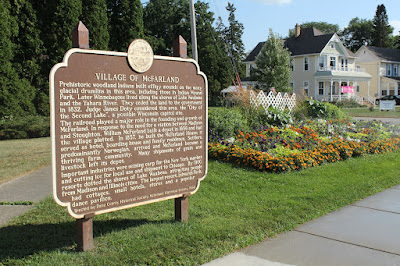 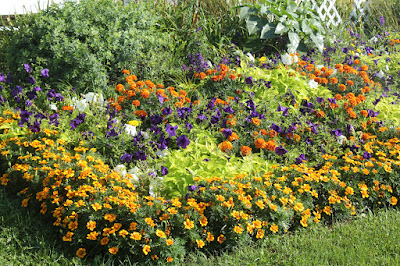 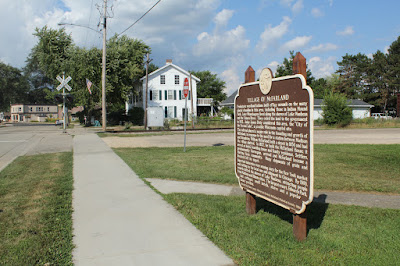 Looking north along Exchange Street.
The marker is located in McFarland, Wisconsin.