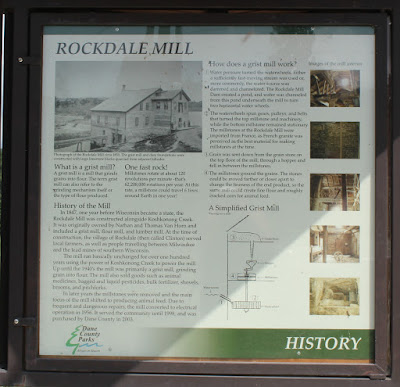 What is a grist mill?

A grist mill is a mill that grinds grain into flour. The term grist mill can also refer to the grinding mechanism itself or the type of flour produced.

Millstones rotate at about 120 revolutions per minute -- that's 62,208,000 rotations per year. At this rate, a millstone could travel 6 times around Earth in one year!

History of the Mill

In 1846, one year before Wisconsin became a state, the Rockdale Mill was constructed alongside Koshkonong Creek. It was originally owned by Nathan and Thomas Van Horn and included a grist mill, flour mill, and lumber mill. At the time of construction, the village of Rockdale (then called Clinton) served local farmers, as well as people traveling between Milwaukee and the lead mines of southern Wisconsin.
The mill ran basically  unchanged for over one hundred years using the power of Koshkonong Creek to power the mill. Up until the 1940's the mill was primarily a grist mill, grinding grain into flour. The mill sold goods such as animal medicines, bagged and liquid pesticides, bulk fertilizer, shovels, brooks, and pitchforks.
In later years the millstones were removed and the main focus of the mill shifted to producing animal feed. Due to frequent and dangerous repairs, the mill converted to electrical operation in 1956. It served the community until 1998, and was purchased by Dane County in 2003.

How does a grist mill work?

➀ Water pressure turned the waterwheels. Either a sufficiently fast-moving stream was used or, more commonly, the water source was dammed and channelized. The Rockdale Mill Dam created a pond, and water was channeled from this pond underneath the mill to turn two horizontal water wheels.
➁ The waterwheels spun gears, pulleys, and belts that turned while the top millstone remained stationary. The millstones at the Rockdale Mill were imported from France, as French granite was perceived as the best material for making millstones at the time.
➂ Grain was sent down from the grain store on the top floor of the mill, through a hopper and fell in between the millstones.
➃ The millstones ground the grains. The stones could be moved farther or closer apart to change the fineness of the end product, so the same mill could create fine flour and roughly cracked corn for animal feed. 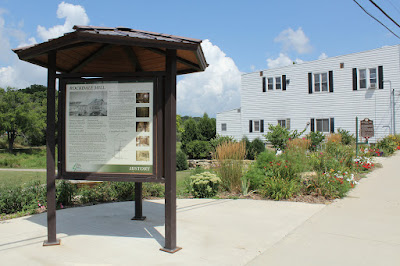 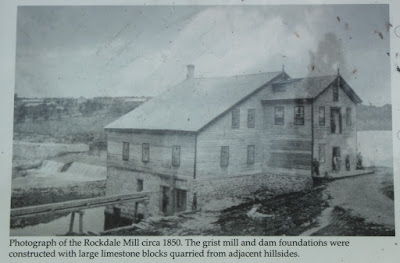 Photograph of the Rockdale Mill circa 1850.  The grist mill and dam
foundations were constructed with large limestone blocks
quarried from adjacent hillsides. 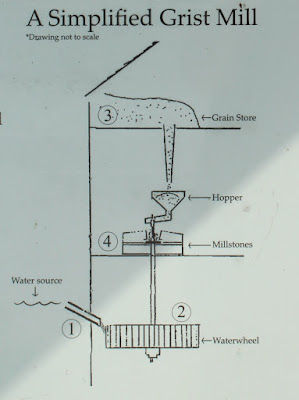 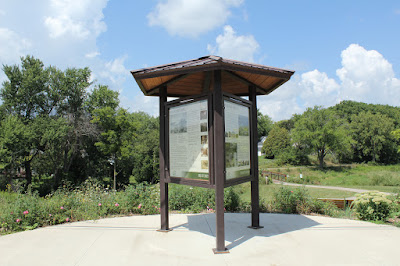 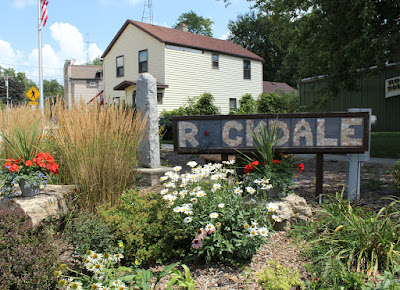