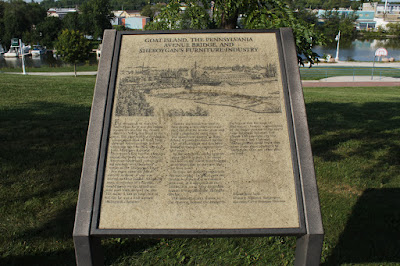 For thousand of years the Sheboygan River was the major means of travel for the Native American tribe that lived in the area. The river winds a serpentine course more than 60 miles long through three counties before emptying into the blue waters of Lake Michigan, forming Sheboygan's fine harbor. One can almost see finely crafted Native American birch bark canoes gliding serenely over the placid waters of the Sheboygan River.

For many years the island directly in front of you was known as Goat Island. An elderly man, somewhat of a hermit, raised goats on the island and sold goat milk around the city. His name is lost in time, but in his day he was a well-known Sheboygan character.

Before the island was used to raise goats, a tiny shipyard occupied the area for several years and built a number of mall ships. The island now known as Boat Island is presently owned by the City of Sheboygan and has been leased to various occupants over the years.

In the sketch the island appears larger than it is now. The shape and size of the island has changed many times due to currents and the river level.

To your left is the Pennsylvania Avenue bridge. In the sketch the bridge is depicted as a wooden structure as it appeared in the 1880s. For some long-forgotten reason it was called the Shanghau Bridge.

The industrial area shown in the drawing behind the bridge is the region that for most of Sheboygan's history was occupied by the major portion of the city's huge furniture industry. For almost 100 years the city was known as Chair City and Sheboyganites could boast that more chairs were produced in Sheboygan than any other place on earth.

The marker is located at a park alongside the east bank of the Sheboygan River, and is accessible from southbound North 10th Street where its name changes to North Water Street, at its T-intersection with New York Avenue, Sheboygan, Wisconsin 53081. 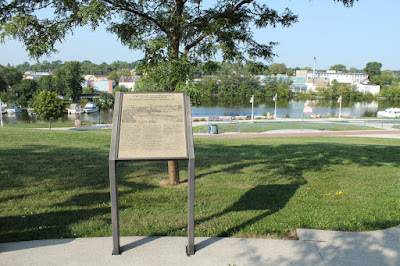 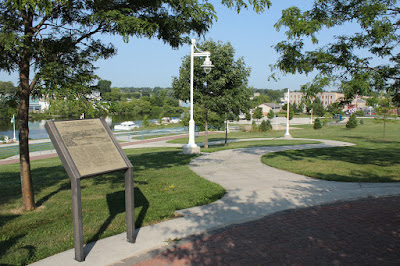 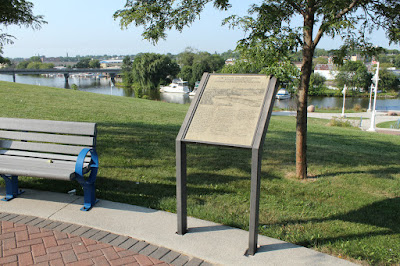 Looking south, with the referenced "Goat Island" and
Pennsylvania Avenue Bridge in the distance. 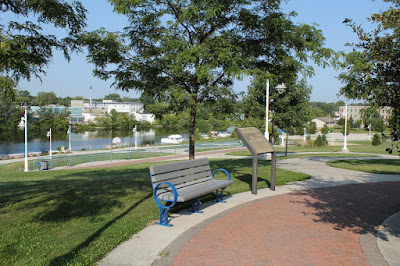 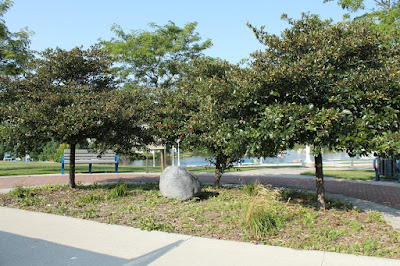