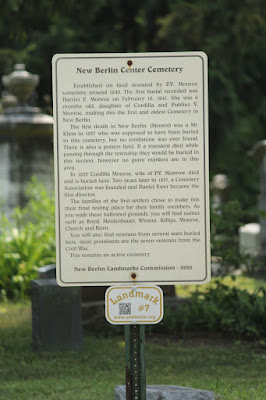 Established on land donated by P. V. Monroe sometime around 1840. The first burial recorded was Harriet E. Monroe on February 15, 1841. She was 6 months old, daughter of Cordilla and Publius V. Monroe, making this the first and oldest Cemetery [sic] in New Berlin.

The first death in New Berlin, (Mentor)  [sic] was a Mr. Klein in 1837 who was supposed to have been buried in this cemetery, but no tombstone was ever found. There is also a potters field. If a transient died while passing through the township they would be buried in this section,  [sic] however  [sic] no grave markers are in this area.

The families of the first settlers chose to make this their final resting place for their family members. As you walk through these hallowed grounds, you will find names such as Boyd, Meidenbauer,  Winton, Killips, Monroe, Church and Korn.

This remains an active cemetery. 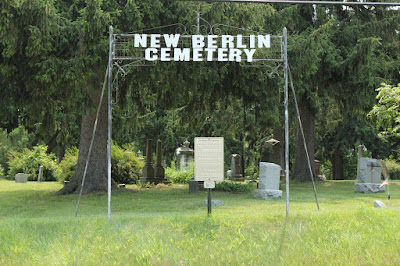 The marker is located at New Berlin Cemetery
in New Berlin, Wisconsin.