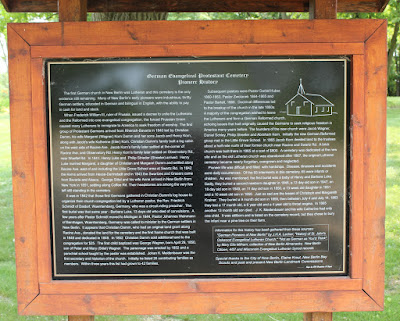 
The first German church in New Berlin was Lutheran and this cemetery is the only evidence still remaining. Many of New Berlin’s early pioneers were industrious, thrifty German settlers, educated in German and bilingual in English, with the ability to pay in cash for land and stock.

When Frederick William III, ruler of Prussia, issued a decree to unite the Lutherans and the Reformed into one evangelical congregation, the forced Prussian Union caused many Lutherans to immigrate to America to seek freedom of worship. The first group of Protestant Germans arrived from Rhenish-Bavaria in 1840 led by Christian Damm, his wife Margaret (Wagner) Korn Daniin and her sons Jacob and Henry Korn, along with Jacob’s wife Katherine (Eiler) Kom. Christian Damm’s family built a log cabin on the weat side of Racine Ave. Jacob Korn’s family settled at the comer of Racine Ave. and Observatory Rd. Henry Korn’s family later settled on Observatory Rd., near Woelfel Rd. In 1841, Henry Luke and Philip Strieder (Streeter) arrived. Henry Luke married Margaret, a daughter of Christian and Margaret Damm and settled along Racine Ave. east of and including the Little Grove School area at Swartz Rd. In 1842 the Kems arrived from Hesse-Darmstadt and in 1843 the Swartzes and Grasers came from Bavaria and Alsace. George Sittel and his wife Anna arrived in New Berlin from New York in 1851, settling along Coffee Rd. Their headstones are among the very few still left standing in the cemetery.

It was in 1842 that those first Germans gathered in Christian Damm’s log house to organize their church congregation led by a Lutheran pastor, the Rev. Friedrich Schmidt of Daldorf, Wuememberg, Germany, who was a circuit-riding preacher. The first burial was that same year - Barbam Luke, 13 days old who died of convulsions. A few years after Pastor Schmidt moved to Michigan in 1844, Pastor Johannes Weinmann of Berahagen, Wuentemberg, Gemiaay was called to minister to the German settlers in New Berlin. It appears that Christian Damm, who had an original land grant along Racine Ave., donated the land for the cemetery and the first frame church that was built in 1848 and dedicated in 1849. In 1852 Christian Damm sold additional lend to the congregation for $25. The first child baptized was George Wagner, born April 29, 1850, son of Peter and Mary (Sittel) Wagner. The parsonage was erected by 1852 and a parochial school taught by the pastor was established. Johan K. Meidenbauer was the first secretary and historian of the church. Initially he listed 26 contributing families as members. Within three years this list had grown to 42 families.

Subsequent pastors were Pastor Daniel Huber, 1860-1863, Pastor John Zwolanek 864-1865 and Pastor Barte1t-1866. Doctrinal differences led to the breakup of the church in the late 1860s. A majority of the congregation wished to leave the Lutherans and form a German Reformed church, echoing the issues that had originally caused the Germans to seek religious freedom in America many years before. The founders of the new church were Jacob Wagner, Daniel Schley, Philip Streeter and Abraham Kem. Initially the new German Reformed group met in the Little Grove School. In 1865 Jacob Koni deeded land to the trustees about a half-mile north of their former church near Racine and Swartz Rd. A brick chumh was built thers in 1865 at a cost of $800. A cemetery was dedicated at the new site and as the old Lutheran church was abandoned after 1867, the original Lutheran cemetery became nearly forgotten, overgrown and neglected.

Pioneer life was difficult and filled with hardships. Disease, illness and accidents were daily occurrences. Of the 93 interments in this cemetery, 65 were infants or children. As was mentioned, the first burial was a baby of Henty and Barbara Luke. Sadly, they buried a second newborn daughter in 1846, a 13 day o1d,son in 1847, an 18 day old son in 1849, an 11 day old son in 1850, a 13 week old daughter in 1851 and a 10 week old son in 1858. Just as sad are the losses of Christoph and Murgareth Kminer. They buried a 9 month old son in 1859, then between July 4 and July 14, 1863 they lost a 17 month old, a 6 year old and a 4 year old to throat angina. In 1865 another 13 month old son died. J.K. Meidenbauer and his wife Catherine had only one child. It was stillborn and is listed on the cemetey record, but they chose to bury the infant near a pine tree on their farm.

Information for this history has been gathered from these sources: German Pioneers of New Berlin by J.H.A. Locher; History of St. John's Oakwood Evangelical Church, Not a German as You'd  Think, by Mary Ella Milham; collection of New Berlin Almonacks; New Berlin Citizen 4/87, and Wisconsin Evangelical Lutheran Synod records.

Special thanks to the City of New Berlin, Elaine Kraut, New Berlin
Boy Scouts and past and present New Berlin Landmarks Commissions. 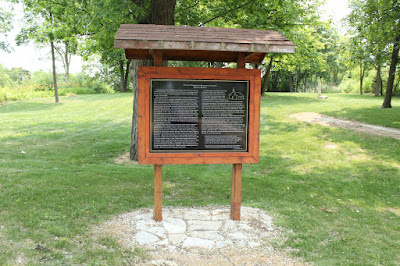 The names of the interred. 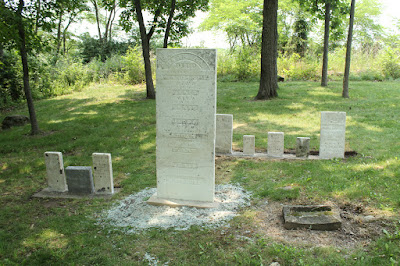 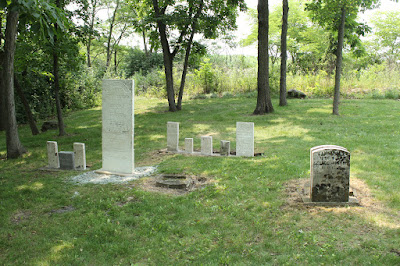 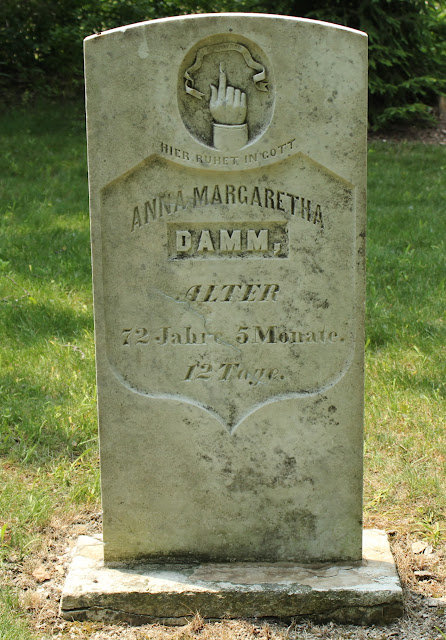 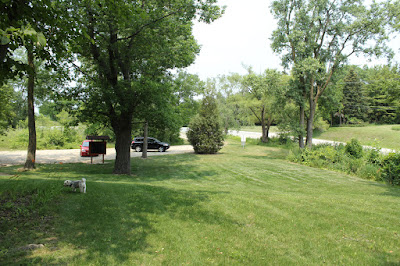 Plenty of parking at this location. 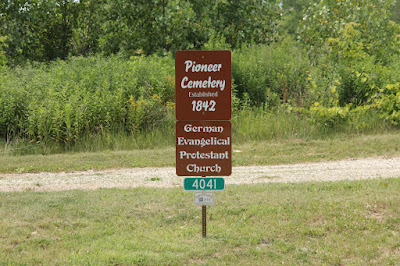 The cemetery is located in New Berlin, Wisconsin.