Collecting of Wild Plants and Mussels 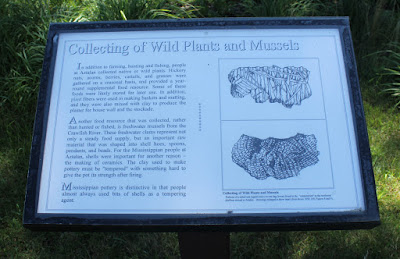 Collecting of Wild Plants and Mussels

In addition to farming, hunting and fishing, people at Aztalan collected native or wild plants. Hickory nuts, acorns, berries, cattails, and grasses were gathered on a seasonable basis, and provided a year-round supplemental food resource. Some of these foods were likely stored for later use. In addition, plant fivers were used in making baskets and matting, and they were also mixed with clay to produce the plaster for house wall and the stockade.

Another food resource that was collected, rather than hunted or fished, is freshwater mussels from the Crawfish River. These freshwater clams represent not only a steady food supply, but an important raw material that was shaped into shell hoes, spoons, pendants, and beads. For the Mississippian people at Aztalan, shells were important for another reason -- the making of ceramics. The clay used to make pottery must be "tempered" with something hard to give the pot its strength after firing.

Mississippian pottery is distinctive in that people almost always used bis of shells as a tempering agent. 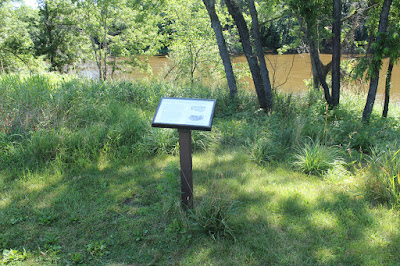 With the CrawfishRiver in the background. 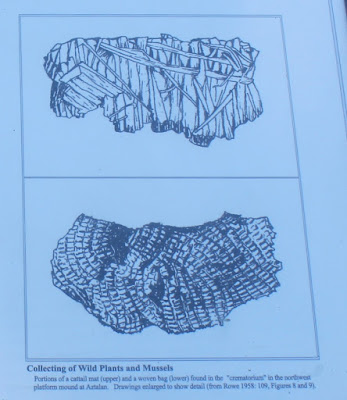 Collecting of Wild Plants and Mussels
Portions of a cattail mat (upper) and a woven bag (lower) found in the "crematorium" in the northwest platform mound at Aztalan. Drawings enlarged to show detail (from Rowe 1958: 109, Figures 8 and 9). 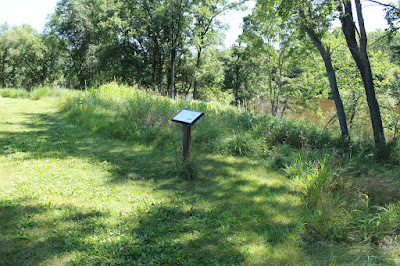 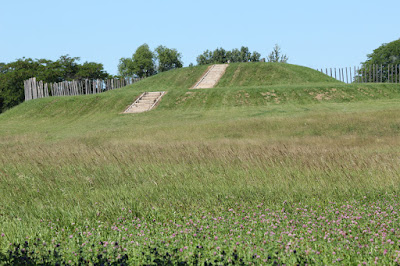