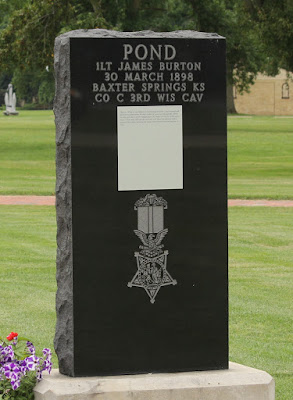 Citation: While in command of two companies of cavalry, was surprised and attacked by several times his own number of guerrillas, but gallantly rallied his men, and after a severe struggle drove the enemy outside the fortifications. First Lt. Pond then went outside the works and, alone and unaided, fired a howitzer three times, throwing the enemy into confusion and causing him to retire.


Major James Burton Pond, for thirty years a well-known lecture manager, died Sunday at his home in Jersey City, as the result of an operation on June 17, in which his right leg was amputated. He was sixty-five years old. Major Pond was born in Cuba, Allegany County, N. Y., June 11, 1838. He was a son of Willard Elmer and Clarissa (Woodford) Pond. His boyhood was spent in Wisconsin, where, as he says, the Bible and the Tribune were about the only library advantages he had.

Before he was fifteen years old he ran away from home and secured employment in a country printing office in Fond du Lac. Then he turned up in Kansas, where for three months he carried a rifle with John Brown. He was one of the Denver, Col., pioneers, and he was also among the first who went to Pike's Peak in 1859.

He organized on Oct. 6, 1861, Company C of the Third Wisconsin Cavalry, and served through the Civil War as captain and finally as major in the regiment. He was one of seventeen survivors of a band of 118 in the Baxter Springs massacre by the guerilla chief Quantrell in 1863.

With James Redpath, Major Pond organized the Redpath Lyceum Bureau, and was the New York representative of the firm's interests. Later he established himself in the business in which he made such a great success. 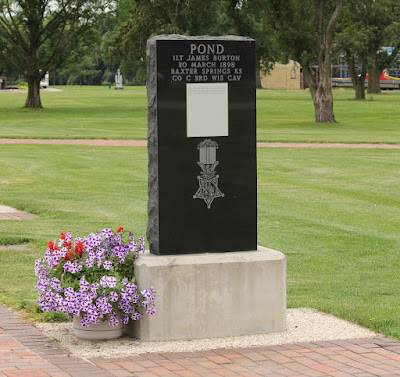 1LT James Burton Pond's memorial is second on the right.