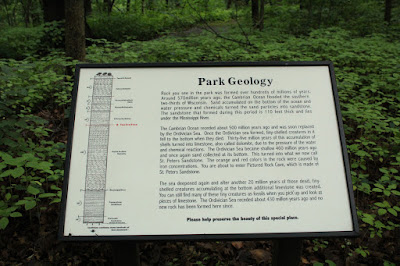 Rock you see in the park was formed over hundreds of millions of year. Around 570 million years ago, the Cambrian Ocean flooded the southern two-thirds of Wisconsin. Sand accumulated on the bottom of the ocean and water pressure and chemicals turned the sand particles into sandstone. The sandstone that formed during this period is 110 feet thick and lies under the Mississippi River.

The Cambrian Ocean receded about 500 million years ago and was soon replaced by the Ordivician Sea. Once the Ordivician sea [sic] formed, tiny-shelled creatures in it fell to the bottom when they died. Thirty-five million years of this accumulation of shells turned into limestone, also called dolomite, due to the pressure of the water and chemical reactions. The Ordivician Sea became shallow 460 million years ago and once again sand collected at its bottom. This turned into what we now call St. Peters  [sic] Sandstone. The orange and red colors in the rock were caused by iron concentrations. You are about the enter Pictured Rock Cave, which is made of St. Peters [sic] Sandstone.

The sea deepened again and after another 20 million years of those dead, tiny-shelled creatures accumulating at the bottom additional limestone was created. You can still find many of these tiny creatures as fossils when you pick up and look at pieces of limestone. The Ordivician Sea receded about 430 million years ago and no new rock has been formed here since.

Please help preserve the beauty of this special place.

NOTE: The marker states "You are about the enter Pictured Rock Cave, which is made of St. Peters [sic] Sandstone." However, there is no cave at this location. 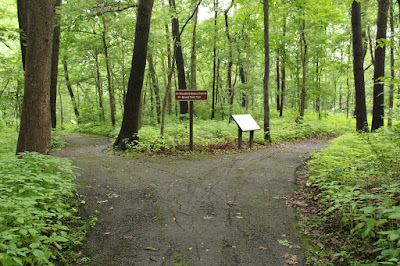