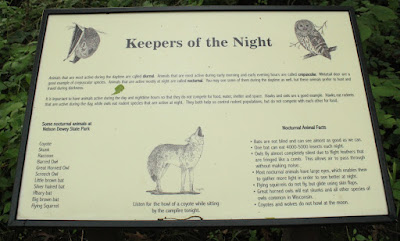 Keepers of the Night

It is important to have animals active during the day [sic] and nighttime hours so that they do not compete for food, water, shelter and space. Hawks and owls are a [sic] good example [sic]. Hawks eat rodents that are active during the day, while owls eat rodent species that are active at night. They both help us control rodent populations, but do not compete with each other for food.

Listen for the howl of a coyote while sitting
by the campfire tonight.