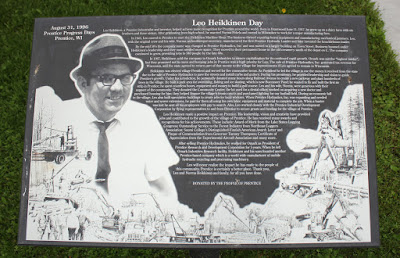 Leo Heikkinen, a Prentice industrialist and inventor, helped achieve name recognition for Prentice around the world. Born in Brantwood June 11, 1917, he grew up on a dairy farm with six brothers and three sisters. After graduating from high school, he married Norma Pokela and moved to Milwaukee to work for a major manufacturing firm.

In 1945, Leo moved to Prentice to start the Heikkinen Machine Shop. The business thrived repairing heavy equipment and manufacturing mechanical jammers. Leo, with the original crew and his wife Norma as bookkeeper-secretary, manufactured the first Prentice Hydraulic Loader and later invented the knuckleboom loader.

By the mid 50s the company name was changed to Prentice Hydraulics, Inc. and was moved to a larger building on Town Street. Business boomed under Heikkinen's leadership and they soon needed more space. They moved to their permanent home in the old creamery south of the depot on C. The company continued to grow, providing jobs to 340 people by the late 60s.

In 1967, Heikkinen sold the company to Omark Industries to ensure capitalization for its continued rapid growth. Omark was not the "highest bidder", but they promised not to move and keeping jobs in Prentice was a high priority for Leo. The sale of Prentice Hydraulics, Inc. generated tax revenue for Wisconsin, and the state agreed to return part of that money to the village for improvements if Leo agreed to remain in Wisconsin.

Heikkinen was elected village President and served for five consecutive terms. As President he led the village to use the money it received from the state due to the sale of Prentice Hydraulics to pave the streets and install curbs and gutters. During his presidency, he the provided leadership and vision to guide Prentice's growth. Under his jurisdiction, he personally donated many hours along railroad avenue to create a new parkway and plant hundreds of trees in the village. He built a park area for swimming, fishing and ice skating, which is now Buccaneer Pond; he wanted to fly and built the first air strip in Prentice; he spent countless hours, equipment and money to build a golf course. Leo and his wife Norma were generous with their support of the community. They donated the Community Center; the lot used for a dental office; worked on acquiring a new doctor and purchased housing for him; they helped finance the village's tennis courts and purchased lighting for our football field. When Prentice Hydraulics, Inc. was expanding and needed water and sewer extensions, he paid for them all using his own labor, equipment and material to complete the job. When a hunter was lost he sent all his employees with pay to search.

Leo Heikkinen made a positive impact on Prentice. His leadership, vision and creativity have provided jobs and contributed to the growth of the village of Prentice. He has received many awards and recognition's for his achievements. These include: Award of Merit from the Lake States Logging Congress; Outstanding Service to the Forest Industry from Northeast Loggers Association; Suomi College's Distinguished Finnish American Award; Letter and Plaque of Commendation from Governor Tommy Thompson; Certificate of Appreciation from the Experimental Aircraft Association and many more.

After selling Prentice Hydraulics, he worked for Omark as President of Prentice Research and Development Corporation for 5 years. When he left Omark Industries Research facility, Heikkinen and his sons founded Multitek, a Prentice-based company which manufactures mobile hydraulic recycling & processing machinery.

Leo will never realize the impact he has made to the people of this community, Prentice is certainly a better place to live & work. Thank you Leo & Norma, for all you have done.

The marker is located at the Prentice Village Hall on southbound Railroad Avenue, at its intersection with Spruce Street, at 605 Spruce Street, Prentice, Wisconsin 54556.

The Legacy of Leo Heikkinen and the Prentice knuckleboom log Loader

See also, Prentice World War I Roll of Honor, also at this location. 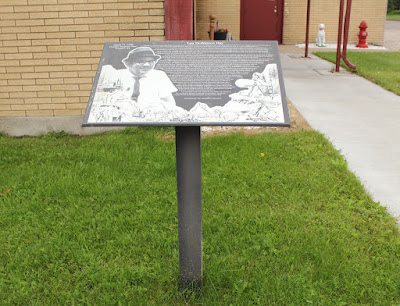 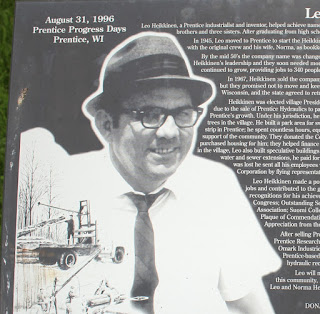 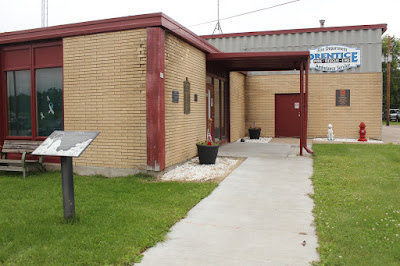 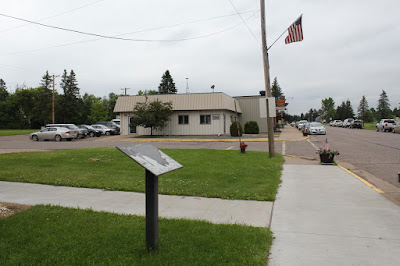 Looking north at the intersection of Spruce Street and Railroad Avenue.
The marker is located in Prentice, Wisconsin.