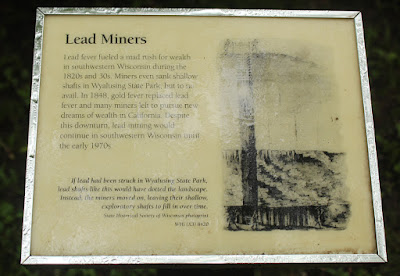 Lead fever fueled a mad rush for wealth in southwestern Wisconsin during the 1820s and 30s. Miners even sank shallow shafts in Wyalusing State Park, but to no avail. In 1848, gold fever replaced lead fever and many miners left to pursue new dreams of wealth in  California. Despite this downturn, lead mining would continue in southwestern Wisconsin until the early 1970s.

If lead had been struck in Wyalusing State Park, lead shafts like this would have dotted the landscape. Instead, the miners moved on, leaving their shallow, exploratory shafts to fill in over time.