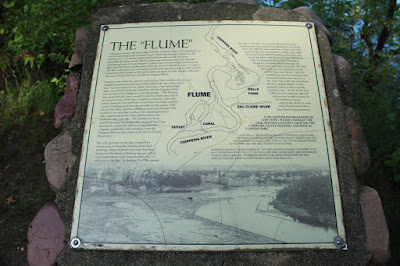 Looking east across Half Moon Lake from the northeast corner of Carson Park one sees the swimming beach and bath house. These structures are adjacent to the terminal point of a former engineering feat known then as the log flume. Essentially this flume, some called it a sluiceway, was part open canal and part underground tunnel. It was designed to divert logs from the Chippewa River just above the Dells Dam and float them from the river to Half Moon Lake (1.2 miles.) The lake would then serve as a holding pond where the logs could be held until the several saw mills located on the banks could saw them into the shingles, lath and dimension lumber that was to build the American West.

Starting in the 1850's the pineries north of Eau Claire yielded a bonanza of straight grained white pine logs to the lumberjacks' axes and crosscut saws. Cut and stacked in the winter, these logs, come spring high water, were floated down the tributaries into the Chippewa River and then down the Chippewa to the Mississippi. The floating logs marked for the many sawmills in the Eau Claire Area had to be separated from all the logs owned by companies with mills further down the river and held in Eau Claire until they could be sawed. A holding pond near the sawmills was the answer. Half Moon Lake made a perfect holding pond for the Sherman Mill located in the area close to where the swimming beach is now situated and for the Shaw mill located on the southwest end of the lake. The problem for these sawmill operators was getting their stamped logs (Logs destined for a particular mill were stamped with a company symbol like cattle branding) from the Chippewa River to their mills on the shore of Half Moon Lake.

The mill operators on the lake struggled for twenty years to keep this holding pond filled with logs. Many methods were tried, but there always was the dream of floating logs via a short canal from behind a dam located in the river 1.2 miles east of the lake. In the post Civil War period, the idea of the dam was seriously advanced and after much controversy and political agitation it was finally built. By 1880 the open log flume or log canal with a tunnel at the west end became a reality. Logs could be sorted in the Dells Pond behind the dam, sent down the flume, and discharged into Half Moon Lake. It's estimated that at least 100 million board feet of lumber floated through the flume every year that it was used. By 1908 the lumber era was coming to an end and the flume was closed. After the prohibition era a local brewery used the tunnel end to store beer for a few years, but as the decaying flume became a public danger, it was gradually filled in and eventually ceased to exist. As late as the year 2000, however, property was still sinking into eroded sections of the old flume forcing engineering efforts to cope with this persistent link to Eau Claire's logging history.

For further information on this topic please consult the Paul Bunyan Logging Camp or the Chippewa Valley Museum located in Carson Park.


NOTE: The marker is very easy to locate once inside Carson Park. Use the above GPS coordinates to arrive at the markers location. 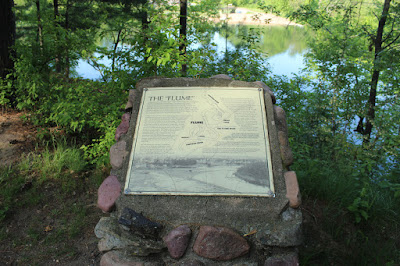 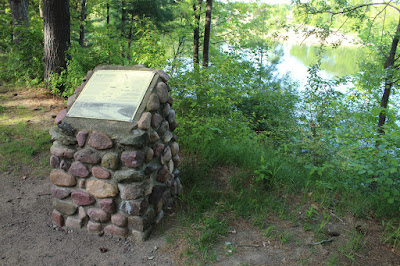 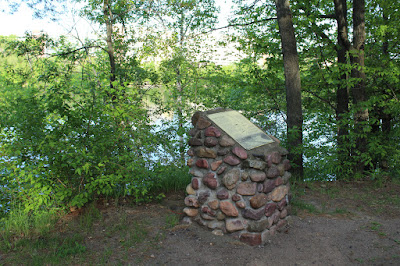 The marker is located inside Carson Park in Eau Claire, Wisconsin.