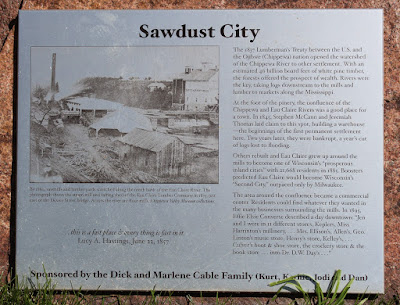 The 1837 Lumberman's Treaty between the U.S. and the Ojibwe (Chippewa) nation opened the watershed of the Chippewa River to other settlement. With an estimated 46 billion board feet of pine timber, the forests offered the prospect of wealth. Rivers were the key, taking logs downstream to the mills and lumber to markets along the Mississippi.

At the foot of the pinery, the confluence of the Chippewa and Eau Claire Rivers was a good place for a town. In 1845, Stephen McCan and Jeremiah Thomas laid claim to this spot, building a warehouse -- the beginnings of the first permanent settlement here. Two years later, they were bankrupt, a year's cut of logs lost to flooding.

Others rebuilt and Eau Claire grew up around the mills to become one of Wisconsin's "prosperous inland cities" with 21,668 residents in 1885. Boosters predicted Eau Claire would become Wisconsin's "Second City," outpaced only by Milwaukee.

The area around the confluence became a commercial center. Residents could find whatever they wanted in the many businesses surrounding the mills. In 1895, Effie Elsie Converse described a day downtown: "Jen and I were in 11 different stores, Keplers, Miss Harrinton's millinery, . . . Mrs. Ellison's, Allen's, Geo. Linton's music store, Henry's store, Kelley's, . . . Culver boot & shore store, the crockery store & the book store . . . into Dr. D. W. Day's . . ."

The marker is located at Phoenix Park, along the Chippewa River State Trail, and is accessible from eastbound Riverfront Terrace, east of its intersection with South Barstow Street, Eau Claire, Wisconsin 54703. 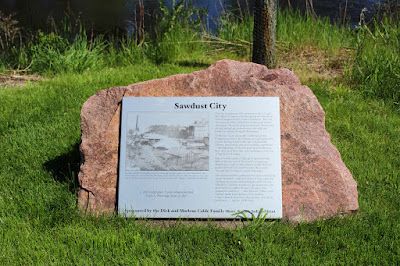 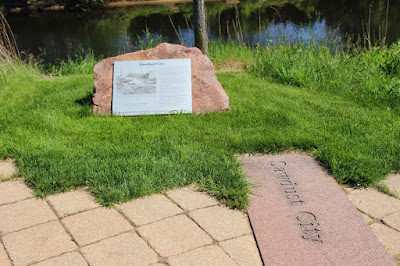 With the Eau Claire river in the background. 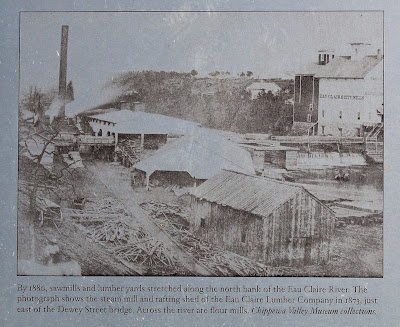 By 1880, sawmills and lumber yards stretched along the north bank of the Eau Claire River. The photograph shows the steam mill and rafting shed of the Eau Claire Lumber Company in 1873, just east of the Dewey Street bridge. Across the river are flour mills. Chippewa Valley Museum collections. 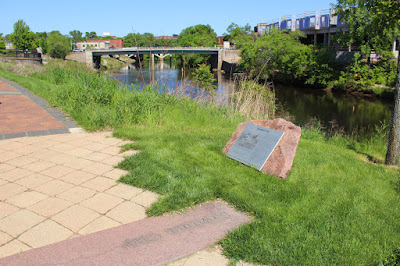 Looking southeast, with the Eau Claire River
and Barstow Street Bridge visible in the distance. 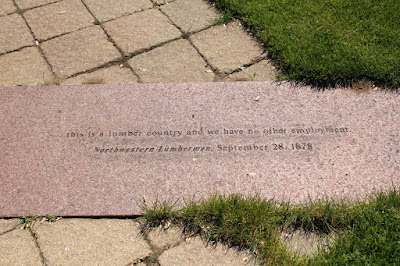