Recreation on Half Moon Lake

"The regular meeting of the Dovre Ski Club will be held Friday evening...all members must be present. The home boys have improved wonderfully and a lively contest is looked for."

Once part of the meandering Chippewa River, this crescent-shaped oxbow became known as Half Moon Lake. Used in the 19th century as a holding pond for logs and to harvest ice for refrigeration, its waters also offered many opportunities for solitude and recreation. Through the years, seasonal events have drawn sportsman, athletes and spectators to the lake and its shores.

In winter, ice fishing, skiing, skating, and horse racing brought people together to enjoy events on the ice. As part of Horseshoe Island (now known as Carson Park,) the bluffs at the north end of the lake offered an excellent place for a winter ski jump. A slide erected in 1889 was used by the Dovre Ski Club for Sunday afternoon tournaments and crowds gathered on the frozen lake to watch the jumpers fly distances as far as fifty-five feet. Horse racing was also popular as fans watched riders who competed for purses up to $80. Today, figure skating and hockey players clear the snow to practice, and shacks dot the frozen lake as hardy anglers patiently wait for a lucky bite during the ice fishing season.

In summer, the lake came to life with swimming, fishing and boating. Log rolling competitions were also popular, and in 1941 over 5,000 people watched the world championship log rolling tournament. During the 1898 Fourth of July celebration, Carl and John Johnson appeared on a waterbike; a bicycle suspended on wooden pontoons with the sprocket driving a propeller and handle bars steering the rudder. Today, people still enjoy picnics on the shore or rollerblading and bicycling the trails. And spectators gather to watch the Fourth of July fireworks or the Eau Claire Ski Sprites, a troupe of youth precision water-skiers that present exhibition shows at Half Moon Lake.

Sponsored by:
The Guettinger Family
1999

The marker is located along the Chippewa River State Trail, on the east bank of the eastern half of Half Moon Lake, Eau Claire, Wisconsin 54703.

NOTE: There is no parking anywhere near this marker, located on the Chippewa River State Trail directly behind a huge fenced-in elementary school blocking easy access to the marker. This is my best suggestion to access the marker:


Park at the parking lot (GPS coordinates above). You will see the Chippewa River State Trail in front of you. Enter the trail, then head north (walk to your right). Follow the trail 0.2 miles. You will find the marker on your left.

This marker is No. 17 in a series of markers erected by the Eau Claire Landmarks Commission. 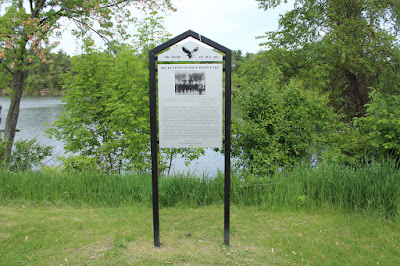 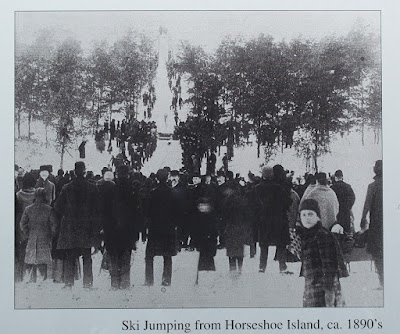 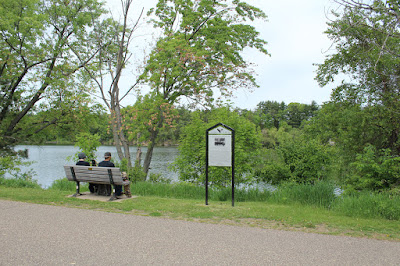