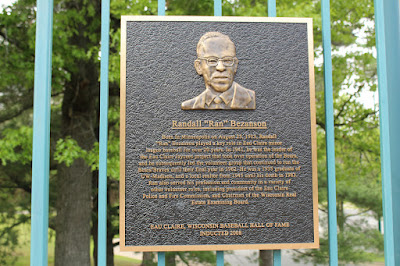 Born in Minneapolis on August 25, 1913, Randall
"Ran" Bezanson played a key role in Eau Claire minor
league basebell for over 20 years. In 1941, he was the leader of
the Eau Claire Jaycees project that took over operation of the Bears,
and he subsequently led the volunteer group that continued to run the
Bears/Braves until their final year in 1962. He was a 1935 graduate of
UW-Madison, and a local realtor from 1945 until his death in 1983.
Ran also served his profession and community in a variety of
other volunteer roles, including president of the Eau Claire
Police and Fire Commission, and Chairman of the Wisconsin Real
Estate Examining Board.

Randall "Ran" Bezanson's marker is sixth from the left.