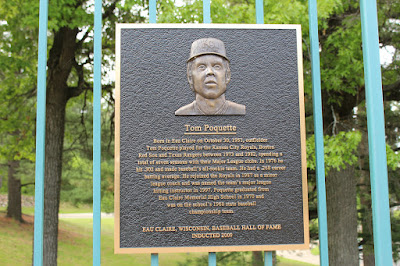 Born in Eau Claire on October 20, 1951, outfielder
Tom Poquette played for the Kansas City Royals, Boston
Red Sox and Texas Rangers between 1973 and 1982, spending
a total of seven seasons with their Major League clubs. In 1976 he
hit .302 and made baseball's all-rookie team. In had a .268 career
batting average. He rejoined the Royals in 1987 as a minor
league coach and was named the team's major league
hitting instructor in 1997. Poquette graduated from
Eau Claire Memorial High School in 1970 and
was on the school's 1968 state baseball
championship team.

Tom Poquette's marker is third from the left.