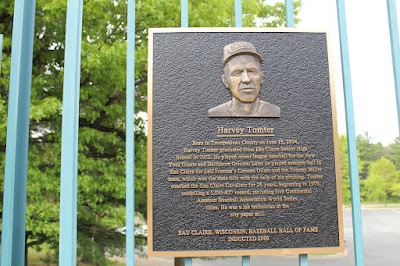 Born in Trempealaeu County on June 15, 1934,
Harvey Tomter graduated from Eau Claire Senior High
School in 1952. He played minor league baseball for the New
York Giants and Baltimore Orioles. Later he played semipro ball in
Eau Claire for Leif Iverson's Conoco Oilers and the Tommy Miller
team, which won the state title with the help of his pitching. Tomter
coached the Eau Claire Cavaliers for 26 years, beginning in 1979,
compiling a 1,595-437 record, including five Continental
Amateur Baseball Association World Series
titles. He was a lab technician at the
city paper mill

Harvey Tomter's marker is fifth from the right.