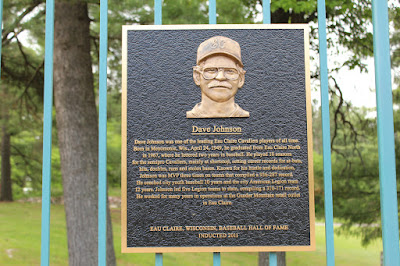 Dave Johnson was one of the leading Eau Claire Cavaliers players of all time.
Born in Menominie, Wis., April 24, 1979, he graduated from Eau Claire North
in 1967, where he lettered two years in baseball. He played 18 seasons
for the semipro Cavaliers, mainly at shortstop, setting career records for at-bats,
hits, doubles, runs and stolen bases. Known for his hustle and dedication,
Johnson was MVP three times on teams that compiled a 936-287 record.
He coached city youth baseball 10 yars and the city American Legion team
12 years. Johnson led five Legion teams to state, compiling a 310-171 record.
He worked for many years in operations at the Gander Mountain retail outlet
in Eau Claire.

Dave Johnson's marker is first on the far left.