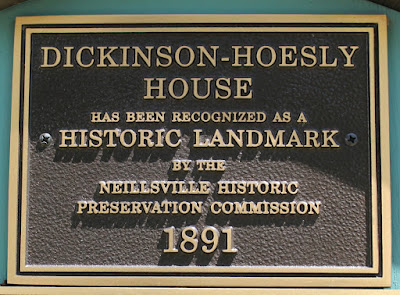 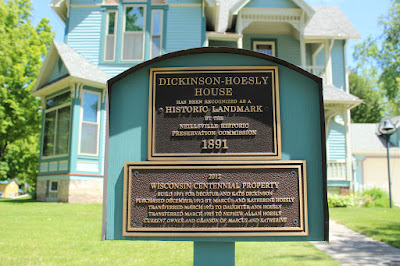 2012
WISCONSIN CENTENNIAL PROPERTY
Build 1891 for Decatur and Kate Dickinson
Purchased December 1912 by Marcus and Katherine Hoesly
Transferred March 1932 to daughter Ann Hoesly
Transferred March 1985 to nephew Allan Hoesly
Current owner and grandson of Marcus and Katherine
The property is located on the southeast corner of the T-intersection of northbound State Street and eastbound East 5th Avenue, at 411 State Street, Neillsville, Wisconsin 54456.
NOTE: The Dickinson House is a private residence. Please respect the privacy of the owners.

The property is also listed on the National Register of Historic Places: Wisconsin.


Decatur Dickinson was born in 1836 in Pennsylvania. At the age of 19 he arrived in Madison Wisconsin, but returned home at the onset of the Civil War, enlisting in the 45th Regiment of the Pennsylvania Volunteer Infantry Company I. After the war ended he again came to Wisconsin, traveling to Neillsville, where he remained until his death in 1915. Dickinson became a very successful general merchant, who supported the booming logging industry. Other successful Neillsville merchants and lumber barons were constructing opulent houses. Dickinson began his statement to his Neillsville status in 1891 on the highest location in the village. His house would cost an unheard of five thousand dollars. The local newspaper reported "the house is one of the finest if not the finest residences in the city and sets the pace for those which are to follow."

Queen Anne architecture, as found in the Dickinson house, reached Wisconsin in the 1880s. Colorful and exuberant describes this elaborate architectural style. The Queen Anne satisfied the rising middle class's desire to show off their newfound success and wealth. The spindling, curved brackets, sunburst motifs, and incising of the Dickinson house recall the decorations found in the furniture of the contemporary English designer Charles Eastlake.

Perhaps one of the most captivating features of the Dickinson house is the multitude of roof planes created by the gables, both large and small. When standing at street level your eye dances from one roof plane to the next on all four sides of the house. The fifteen gables of the irregular rooflines create a composition of light and shadow as the sun's position changes throughout the day.

The interior of the Dickinson house has been handsomely detailed. A beautiful spindled stairway winds its way to the second floor. Fireplaces greet guests in the entrance hall and the sitting room. Window and door openings have wide grooved surrounds with corner blocks that are topped with a four-pointed crown. High ceilings, and the light shed into every room by the many Queen Anne windows captivates every guest. All of the exuberance of the style remains today in this wonderfully preserved building. The Dickinson House is a private residence. Please respect the privacy of the owners. 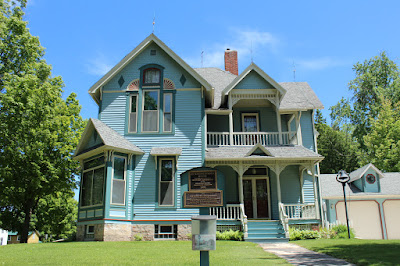 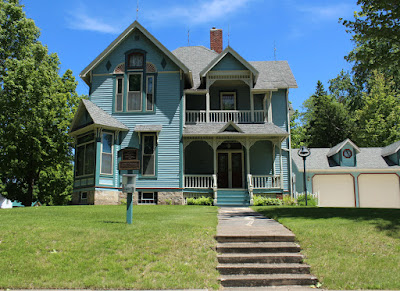 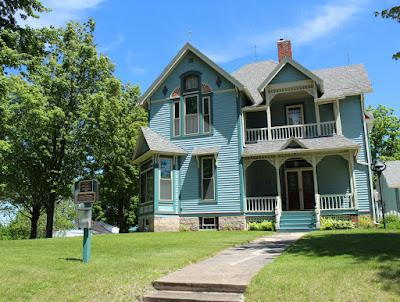 The property is located in Neillsville, Wisconsin.