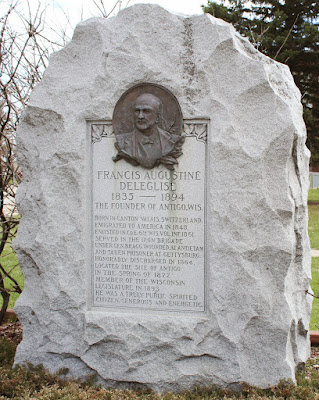 FRANCIS AUGUSTINE
DELEGLISE
1835 - 1894
Born in Canton Valais, Switzerland.
Emigrated to America in 1848.
Enlisted in Co. E. 6th Wis. Vol. Inf. 1861.
Served in the Iron Brigade
under Gen. Bragg. Wounded at Antietam
and taken prisoner at Gettysburg.
Honorably discharged in 1864.
Located the site of Antigo
in the spring of 1877.
Member of the Wisconsin
Legislature in 1893.
He was a truly public spirited
Citizen, generous and energetic.

The marker is located at the V-intersection of northbound U.S. Highway 45 / Superior Street and southbound Milton Street, Antigo, Wisconsin 54490.

NOTE: For ease in finding the marker, it is directly across the street from the Langlade County Historical Society Museum,


Francis Deleglise is unmistakingly the “father of Antigo”. He initially named his settlement Springbrook but later renamed it after “Nequi-Antigo-Seebah”, an Ojibwe Indian phrase meaning “river that flows by the balsam evergreens. 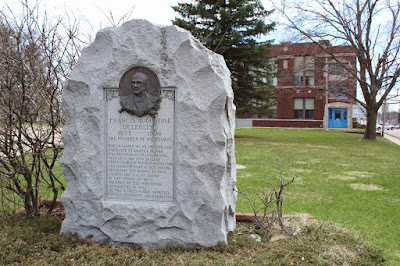 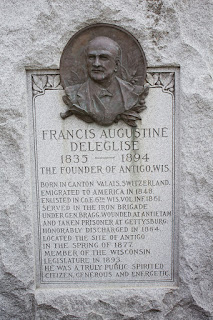 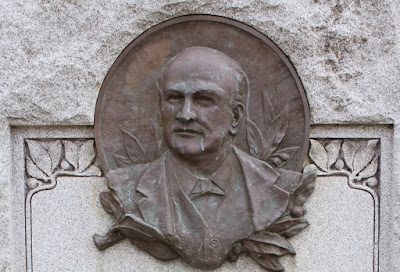 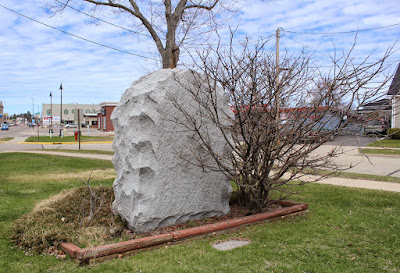 The memorial is located in Antigo, Wisconsin.